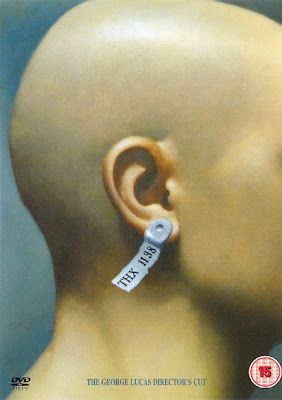 George Lucas’ debut feature was in the genre he’s come to be associated with, viz. the sci-fi genre. But, contrary to what one might expect, it was a polar opposite to the kind of flamboyant extravaganza that he’s popular for thanks to his Star Wars series. THX 1138, expanded from his award-winning student short, is a brooding, disquieting, even surreal, exploration of an Orwellian future. Set in an unknown time in a dystopian, computer-controlled future where everyone is under perpetual surveillance, and a pristine, dehumanising environ reminiscent of Kubrick’s 2001: A Space Odyssey, the film has Robert Duvall as the eponymous bald-headed nameless protagonist. Always dressed in white androgynous attires, he ends up committing two crimes considered inexcusable by the state – those of reducing his sedatives and making love with his female roommate (Maggie McOmie); and these end up in providing him with the resolve to break free. Less about plot, the film is filled with claustrophobic visuals and an oppressive, menacing tone. However, that said, I found the film a tad uneven, and deliberately artsy and sluggish at times – but I’m sure these facets can be forgiven given the challenging nature of this 1984-esque mood piece.

Great post! I really like this because Lucas was still experimenting with style and pace, and THX 1138 comes across as a very talented "student film" as opposed to Blockbuster. As his budgets increased his imagination declined.

Ha ha, well said Alex. Yes, this film could very well have been a fine precursor to groundbreaking sci-fi films, on the lines of 2001 & Solaris. But then, as we all know, money can be a really damaging thing. :)

This is, by far, one of my favorite films out here, and definitely my favorite piece of "tone poem" cinema. I can't really get behind the sluggish, impressionistic facade of Malick's work, but Lucas employs a great sense of widescreen scope and aesthetic dynamism that injects a propulsive energy and momentum into this movie, even when it isn't as concerned with moving its plot ahead. Granted, I'm a fan of the rest of Lucas' cinema as well (yes, including the Prequels), but this is definitely a case of a filmmaker getting it right the first time.

Thanks a lot Bob for sharing your enthusiasm for this little-known Lucas film. Yes, "tone poem" is indeed the apt epithet for this film, as Lucas sure didn't pay as much attention to generic or narrative conventions or story-telling as he did on creating the mood, atmosphere & feel, and that's what this film is all about. And that spectacular chase sequence was an early proof of Lucas' mastery of SFX & VFX.