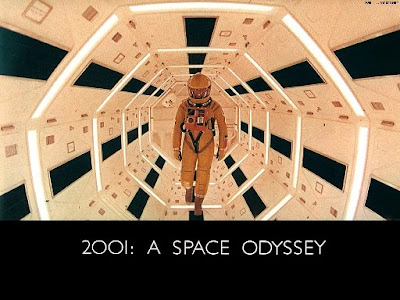 We see a human for the first time nearly 20 minutes into the movie, and hear human voice another 5 minutes later; further, the last 25-odd minutes are again devoid of any dialogues – now that’s the kind of audacity few filmmakers apart from Stanley Kubrick could have displayed. A visual feast like few others, and comprising of some of the most groundbreaking, if understated, special effects for its times, the pristine white, claustrophobic and disorienting interiors of the spaceship must have been the inspiration behind Ridley Scott’s Alien a decade later. Yet, all its technical brilliance apart, the movie is ultimately an intellectually challenging, visceral, ominous, unsettling and poetic meditation on the very framework used to create the film – technology, culminating in a climax that is as mind-bending as it is surreal. By brilliantly juxtaposing the eerie silence of outer space with beautiful Classical-based soundtrack, the movie has at its core a mysterious black monolithic slab with the ability to emit powerful radiations and supposedly placed by an intelligent life form, that propels and becomes a contemporary to man’s evolution from a primeval ape to ones capable of advanced space exploration. Ironically, the film caused “cultural shock” and “social disorientation” when released at the height of the space-race between the and the erstwhile , the very thing that the scientists try to protect civilians from in the film.

I'd have to say that Ridley Scott is no stranger to stealing things from movies that have proven to be ridiculously successful. (Woody Allen does the same, and KUbrick has taken a few things on his own, so no qualms there,eh?)

One of the four or five greatest film ever made. Glad to see you loved it...

Well, I wouldn't really call that stealing, and inspiration, i feel, isn't a bad thing... contrarily one can find signs of inspiration in the films of many acclaimed directors, and that often adds a cultural value to the end product, don't you agree?

Thanks buddy. Yeah, its a regular top-tenner in most movie polls.

@Shubhajit -- I'll tell you something about film: it is much easier but less interesting to say something in words, however it is very much cooler to the viewer when you can cut a corner by relaying a shot or a cinematic concept that is already in the lexicon.

Alright, point taken. In fact the Picasso quote that you've used as a counter-reference, that's one of my favourites too. So there's a big chance that we'll agree on it within the next few years :) Anyway, its been fun having this discussion. Do keep visiting.

Imitation is the sincerest form of flattery, gentlemen. :)

This film changed the way I looked at movies, and while isn't your typical piece of cinema in any way, it completely absorbs me each time I view it, and I learn something. It probably wins my vote for best cinematography ever as well.

I watched this again recently. Always considered a handful of other Kubrick's to be better. Now I'm not so sure about that. 5 stars without question. A timeless incredible film with a scope beyond any since or before. Hal should of won an oscar lol! His performance is unforgettable....M.Roca

Thanks Heather. Yeah, agreed, imitation indeed is the highest form of flattery. And well, as for the cinematography, I don't know if it would win my vote for the best cinematography ever, but it would surely be up there with the chosen few contenders.

Yeah, the film mixed science fiction with philosophy, absurdism, socio-political commentary & surrealism, making its scope something really breathtaking. And yes, HAL 9000 could easily be one of the creepiest villains in film history. Thanks for posting your views.

Its a film that will test your comfort zone, especially when it comes movie viewing. But, it is one of the most influential sci-fi films of all-time, and brings up great questions about a universe we may never know about. Check out my review here: http://dtmmr.wordpress.com/2010/06/22/2001-a-space-odyssey-1968/ Nice Review!

Yes, it certainly remains one of the most influential movies of this genre, and a thunderous statement on our over-reliance on technology. It even goes the Asimov way while commenting on human evolution. I'll check out your review soon. Thanks.

Like practically all Kubrick's films, there is so much to discover on repeat viewings. Unlike so many other films that aren't as exciting, 2001, The Shining, Eyes Wide Shut, Dr. Strangelove etc., all get better and better. Great review, Shubhajit.

I completely agree with your assessment of Kubrick movies, Dan. He made some great masterpieces, and they improve so much with repeat viewings. Dr. Strangelove remains my favourite of the lot, with 2001 not far behind. Thanks a lot!

Funny, I swear I've heard that quote attributed to Chaplin. Maybe he stole it from Picasso? :)