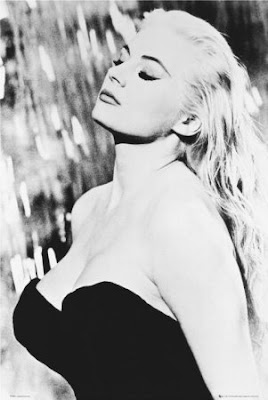 Very few filmmakers apart from Charlie Chaplin have been fortunate to have had their names turned into an adjectives to describe their respective style and/or school of filmmaking. Federico Fellini was one, and consequently La Dolce Vita, considered along with 8 ½ as one of the two greatest masterpieces of the Italian maestro, can only mostly aptly be defined by the epithet Felliniesque. The movie is an astringent portrayal of the rabid celebrity-obsession and fixation that has come to define “modern” society, littered with paparazzo, yellow journalism, hedonism and an overall shallowness. In one of the most widely recognized onscreen performances, Marcello Mastrioanni starred as a bohemian gossip journalist and wannabe litterateur, who spends his days and nights swamped with bored socialites and hookers at various parties and nightclubs. And the ennui, lack of emotional involvement and spiritual dissatisfaction of our picaresque hero form the perfect mirror for the decadence, desolation and debauchery that the he wanders through is perpetually filled with. His boisterous tryst with a beautiful and voluptuous but intellectually vacuous actress (played with carefree abandon by Anita Ekberg) at a Roman fountain remains one of the most iconic movie moments. Shot in glorious black-and-whites, the movie’s circus-like depiction of life’s excess and the emptiness therein made this a landmark European arthouse movie with few equals.

This is one I just flat out have never understood... and I don't just mean the movie, but the appeal of the movie as well. I know that I am in the tiny minority, but I felt like I had just wasted three hours when I finished it. And it's not that I dislike Fellini, as 8 1/2 and La Strada are very good. I just couldn't come to terms with La Dolce Vita.

I feel like I'm missing something, because so many people I respect (like you) adore it, so I need to give it another shot at some point. I own it, so I have it available to watch anytime, but I don't know if I'll be up for it any time soon!

Dave, I sure can understand your reaction to La Dolce Vita & consequently your response.

Both 8 1/2 & La Dolce Vita, I feel, are the kind of films that one loves or hates within the first few minutes itself. You liked the former & disliked the latter, and if my judgement is correct, so my guess would be that its just a matter of the kind of mood you were in then.

Since 8 1/2 is an even more challenging film than La Dolce Vita, I think you might as well give it a second try. At least it won't be as ardous as it would've been had your reactions to the 2 films been the other way round. Having said that, once a movie doesn't work for you, its really tough to getting oneself to watch it again before a significant timeframe has elapsed. I know that from personal experience.

Nice write up, I totally agree. La Dolce Vita is the first Fellini film I ever saw and I couldn't have started at a better place.

Thanks Blake. Incidentally, the first Fellini film that I saw was 8 1/2.

A very great film, and a definitive study of decadence on film. Of course Mastroianni does give one of the most celebrated of performances, and by any barometer of measurement this is always named as one of Fellini's most venerated works with 8 1/2, I VITELLONI, NIGHTS OF CABIRIA, LA STRADA and AMARCORD. You really nailed it here:

"The movie is an astringent portrayal of the rabid celebrity-obsession and fixation that has come to define “modern” society, littered with paparazzo, yellow journalism, hedonism and an overall shallowness."

Thanks Sam. Yeah, Mastroianni gave a stunning performance here. His perfect display of emotional and spiritual detachment, and the way he gives in to the vacuous hedonism around him despite his intellectual worth being more than that, made his a great movie character.

Yeesh! That's a hard place to start. Of all the Fellini films I've seen, 8 1/2 is by far the most inaccessible for me. I'd rather watch Nights of Cabiria or La Strada any day.

Incidentally or accidentally, 8 1/2 & La Dolce Vita are the only 2 Fellini films that I've watched so far. I guess I'm moving from the inaccessible to the accessible where Felini goes :)

A great film and one that is even more relevant today than it was 50 years ago. The shallowness and the paparazzi are worst today than ever.

Absolutely John. That's the hallmark of a great film, isn't it? The ability to transcend time and become universal in its appeal & effectiveness.