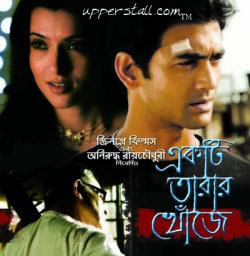 Avik Mukherjee, one of the finest cinematographers in the country, decided to make his directorial debut with Ekti Tara Knonje. I thus had a lot of expectation going into the theatre, and I must admit the film started off quite well; hence one might very well appreciate my disappointment when the promise wasn’t realised. In a way, this movie about a small-town boy who comes to Calcutta to be in the movies and becomes an unwitting part of a crime syndicate, reminded me a lot about the disappointment I felt upon watching another movie by a renowned DOP turned director – Christopher Doyle’s Away With Words. The prime problem with this film lies in the director’s inability to rein in his indulgence into aesthetics without giving much thought on strengthening its narrative drive, more so because it was at the end of the day a plot-based film; consequently, the movie got turned into a collection beautiful but incohesive shots and vignettes. The second problem with the film lied in the director’s inability to control his urges where showing-boasting his film knowledge goes, and hence littering it with film references. Ironically, however, the film’s most memorable moment occurs when Dhritiman Chatterjee’s character enacts the “Of all the gin joints…” scene from , followed by Shayan Munshi’s character playing out the “Someday a real rain will come…” sequence from Taxi Driver. The film has some wonderful songs though.

It is always pleasure to see someone writing about cinema and providing people unbiased feedback without any monetary benefits. Yours blog has guided me to the best of cinema along 1 years. Inception Photo

Thanks a lot Neetu for saying that. It sure means a lot. Yes, I'm not a professional film critic. I was doing a job for the last 3 yrs, and now I'm pursuing higher studies - and neither of the two has/had even an iota of resemblance or convergence with my movie viewing & reviewing. So money isn't something that either motivates me or influences me; rather, even at the risk of stating the obvious I 'll say, its love and love for this medium alone. Thanks again and do keep visiting.

Interesting review-- I found this to be one of the strongest Bengali films I've seen in a the last 3 years. It's also one which I think will resonate with non-Bengali film fans because the themes and emotions are universal. The acting is strong -- the lead star, Shayan Munshi, was I believe a model before becoming an actor and therefore really shouldn't be that good, but his performance is faultless. The songs are pleasant and don't deter from the main narrative, a common complaint of mine with Bollywood or other regional Indian films. I hope this film gets some exposure now that it's had a US DVD release.

Thanks for the comment. Well no disrespect intended, but you might not have seen many Bengali movies cos I wouldn't rank it among the best Bengali films I've seen in recent years. Nonetheless, the acting was indeed good, and the film was removed from the kind of run-of-the-mill thrillers we are regularly served with. And yes, Shayan Munshi was quite a revelation in the film. Looking forward to hear from you more.