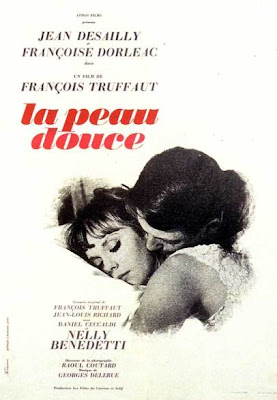 Francois Truffaut has always been vocal about his love for Alfred Hitchcock, and that love was more than apparent in some of his films, including The Soft Skin which is filled with such Hitchcockian elements as adultery, betrayal, revenge and murder. However, that said, despite the seemingly pulpy content, the finely photographed movie is suffused with such distinctly French archetypes and sensibilities as softness, freewheeling tone, intellectual conversations, and understated emotional depth. Pierre (Jean Desailly) is a respected and well-known literary critic. He’s been married to Franca for 15 years and has a cute little girl. However, he throws his well-set life to the winds when he falls for a pretty, much younger air stewardess Nicole while he’s on his way to Lisbon to deliver a lecture on, you guessed it, Balzac. Pierre tries to keep his illicit tryst a secret for a time, but that turns out to be wishful thinking. Initially his wife starts suspecting which inevitably leads to the breakdown of their marriage. And when she gets confirmation of his affair, tragic and chilling repercussions ensue. The filmmaking is marked with restraint, the characters have been well etched so as to make them believable, and the acting is entirely naturalistic. All said and done, it might not rank among Truffaut’s greatest works, but it certainly was not because of any dearth of quality or good intent.

I wish this were available in the US; seems to be OoP.

I finally got a copy of THE BRIDE WORE BLACK which is basically Truffaut mimicking Hitch and even using Bernard Herrmann to score the film. One I would call a minor part of his oeuvre.

Yeah, Truffaut did direct a few movies that were inspired from the American film noir and/or Hitchcock's school of filmmaking. The Soft Skin too would be considered a minor Truffaut; but then, a even minor Truffaut is often better than the best of many filmmakers - I guess that's what makes him one of the great filmmakers.