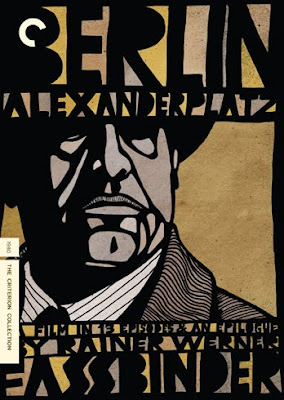 Berlin Alexanderplatz, based on Alfred Doblin’s novel, is R. W. Fassbinder’s magnum opus. Consequently, it has been a gratifying experience for me to complete this staggeringly ambitious 15 ½ hour epic, albeit over a number of sittings. Evocatively shot and leisurely paced, the movie, made in 13-parts and with an epilogue that delves into the surreal and grotesque recesses of a mad man’s mind, has the power to enthrall you and test your patience in equal measures. It chronicles the turbulent life and times, and the various loves and acquaintances of Franz Bieberkoff, its gullible, good-natured protagonist. Ex-convict Franz (played with incredible passion and power by Gunter Lamprecht), who was incarcerated for 4 years for killing his girlfriend in a fit of rage, decides to lead a straight life upon being released from jail; but life has other plans for him, and it comes a full circle for him when his sweetheart Mieze is killed by the man who he considers a friend – the serpentine and womanizing Reinhold, incidentally the same man who had once pushed him out of a car with tragic consequences. The film comprises of a slew of memorable, well-defined characters (brought through courtesy excellent performances, with my favourites being the melancholic Meck, and the vivacious Eva. However, all said, this does remain a flawed film. The rambling storytelling and the overt philosophizing aside, a lot of the actions of and interactions among the characters defy reason and/or explanation. Nevertheless they are mere footnotes vis-a-vis the grand and sweeping nature of this mammoth, tragic and operatic film.

Shubhajit, I have yet to take this one on and am waiting for some cold dark winter to attempt it. I do like Fassbinder from what I've seen which is, Ali: Fear Eats the Soul and The Marriage of Maria Braun (which is amazing). I need to begin exploring more of his films. Thanks by the way for linking me.

Johny, interestingly this was my first tryst with Fassbinder's cinema, and I decided to start with this intimidating epic. Some might find the movie's pacing laborious, but I found it a very satisfying watch on the whole, and would certainly recommend it to you.

This is a very great masterpiece Shubhajit, arguably Fassbinder's piece de resitance. You have framed it superbly, and I can count myself who had no problem with the pacing. I give you a lot of credit for going with this as an introduction to Fassbinder, as it's in many ways his most demanding and complex film. (some would argue for WORLD ON A WIRE). You are on the money when you cite the electrifying performance by Gunter Lamprecht. I am not so sure, however, that I would count the sometimes cryptic narrative as "flawed." It's the kind of review that rewards on subsequent viewing.

But again, a terrific review in every sense!

Yep, this is a masterpiece, and I agree with Sam that I wouldn't call it "flawed," exactly. It's massive and powerful, and its storytelling is brilliant, in my opinion, because of the cumulative power of the slowly unfurling story, the way the sense of doom gradually becomes inescapable until the tragedies of the final episodes and the utter lunacy of the two-hour epilogue.

Amazing that you went with this as a first exposure to Fassbinder, but I don't know if that's the best way to experience it. I think it's probably enriched by some knowledge of Fassbinder's aesthetics and themes in his shorter works, especially since Fassbinder apparently adapted the novel, towards the end of his career, because it had been so monumentally influential on him. Anyway, you should check out the brilliant In a Year of 13 Moons, the BRD trilogy, and Martha.

Shubhajit, did you watch this in 13 parts, or did you try to watch larger chunks at a time? If anyone has any suggestions on how to watch it most effectively, I would appreciate the info.

Thanks a lot Sam for the kind words as always. When a director has the audacity to make a 15 1/2 hour movie, the film by default becomes his piece de resistance. But, the fact that he managed to maintain quality and beauty throughout its length - that further elevates the film's stature. It was demanding and complex alright, but it was also a rewarding experience.

Well, after posting my review I did briefly read your take on it as I'd remembered you'd posted reviews after watching every 2 or 3 episodes at your site long back. So, even though I felt that the film was not perfect, I came to know of your love for this staggering work.

Well, the rambling narrative is something that may or may not distract one depending of his viewing history. I was reasonably comfortable with that, but I found some of the occurrences defying logic. For instance, why did Mieze go for a walk into the woods with Reinhold even though she didn't seem to like him much. And in the woods she was alternately luring him physically (even reciprocating his embraces) and suddenly pushing him off as if she's a one-guy girl and finds him repellant. I'm sure there could be some Freudian explanation behind that, but I found that difficult to be believed as something natural.

Yeah, I guess I ought to have tried a few of Fassbinder's other films before taking the plunge into this epic. But then, as I mentioned, what I felt as flaws were mere footnotes, as on the whole I did find it brilliant work.

Thanks for the suggestions regarding Fassbinder's oeuvre. I'll surely check them out sooner or later. Thanks a lot for posting your views, Ed.

Well, I watched 1 or 2 parts of it at a time. So I guess I watched the complete thing in around 9 odd sittings. However, that said, I think it should be alright for you to devise your own viewing plans, but I'd suggest you watch 1 or 2 episodes (more if time permits) everyday in order to maintain the continuity and flow.

We don't claim to be experts on Fassbinder but after watching a considerable amount of his work,we feel that most of his work is 'flawed' as you so put it.one of the main reasons why we love Fassbinder is that the mistakes he made in directing showed a very human side to him.He wasn't a director who made perfection his drive but rather a constant search for a more honest,raw element mark most of his films.Not having watched Berlin we can't say for sure the flaws you mentioned are valid points but we've noticed Fassbinder had often made his characters do things that are out of the norm.In Maria Braun for instance there was a scene where he showed a woman bein groped by two men for no reason.When her husband sees Maria having sex with another man his reaction to that is unthinkable.More so HER reaction.Sometime he filmed scenes with no apparent logic as in Beware the holy whore where there are plenty of unexplained shots.We would suggest that in order to enjoy Fassbinder it is better for you to suspend believe.At times his movies come from a very theatrical aspect as he came from that background.Isn't life itself flawed?Don't we sometimes do things that defy logic?

Thanks. You've brought up some interesting points that merit discussion. Interestingly, unlike you, I haven't seen much of Fassbinder, with the mammoth Berlin Alexanderplatz being my first (and so far sole) tryst with his body of work. As Ed pointed out above, I guess I shouldn't have started with Berlin. Anyway, as you aptly pointed out, we do at times tend to do things that defy logic or conventions, and so yes, that in turn makes those seemingly inexplicable choice of action seem real. But again, that would rather be an exception and not the rule, and that was my point. Anyway, thanks for recommending Fassbinder's other movies which I'll surely look forward to watching sooner or later.

Hi
Great description and superb comments. I was looking at recent blog entries about B.A. and came across your post. As a huge fan of RWF and the film in particular I've been interested in checking out if anyone's still watching the film much less writing about it. I've recently completed my own derivative work based on Berlin Alexanderplatz but re-set in 1990s post Soviet Russia. It's such a universal theme. Take a look at my site for the book, you may find it interesting. Thanks! FYI it's a lto more readable than Doblin's novel.

Great to read a blog post about this masterpiece that doesn't moan about how long and difficult it is, as if they're somehow forced to watch it by a torturer! For sure, it is difficult going at times, but that's part of the appeal and if you stick it out you're grandly rewarded.

And I'm pretty sure it is actually flawless. If there's something going on that I don't understand then it's much more likely it's a failing on my part rather than anything imperfect with RWF! :-)