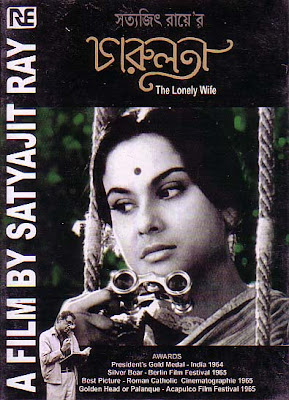 Satyajit Ray once mentioned, “… the one film that I would make the same way, if I had to do it again, is Charulata”. Adapted from a semi autobiographical novella by the great Rabindranath Tagore, this complex and haunting love triangle is set at the backdrop of the Bengal Renaissance – a movement that led to the formation of “modern” India. Bhupati (Sailen Mukherjee) is an upper class Bengali intellectual who is forever engrossed in the political newspaper he edits and prints; consequently Charulata (Madhabi Mukherjee), his beautiful and educated wife, has immersed herself into Bengali literature to alleviate her ennui. The arrival of Bhupati’s young cousin brother Amal (Soumitra Chatterjee), a sensitive poetry-loving vagabond-at-heart, breaks her stupor, and before long, the emotionally fragile Charu finds herself falling for the bohemian Amal. The exquisitely paced film boasts of stirring performances by the three leads, with Madhabi and Soumitra’s being truly astounding. The film comprises of a slew of unforgettable moments, right from the opening where Charu is whiling her time with her opera-glasses, and the one with Charu riding on her swing in complete abandon (perhaps an homage to Kurosawa’s Ikiru), to the terrific freeze-framed finale (reminiscent of Truffaut’s The 400 Blows). The scene where Amal slowly looks towards Charu, who’s standing at a distance, while Bhupati is mournfully speaking on trust, oblivious to Charu’s growing feelings for Amal – well, that was devastating! And Kishore Kumar’s rendition of the classic Tagore song Ami Chini Go Chini was cinema at its purest. The film boasts of great set designs, marvelous usage of light and shadows, and a lovely score (the latter by Ray himself).

p.s. This is my 500th movie review at Cinemascope, and what better way to reach this milestone than via a movie by my favourite filmmaker. So here's a hop, skip and jump from me!

Aha, Was waiting for this. SO soon. It seems that your academic stint hasn't slowed down the activity at CinemaScope one bit. Or is it a fuelling factor?!

Congratulations! This is a remarkable milestone. Waiting for the 1000!

Thanks a lot buddy. Well, my going back to academia certainly has slowed down my involvement with Cinemascope... the good thing is that, it didn't manage to stop my activity here :)

Congratulations on this milestone post, and for choosing one of the cinema's greatest humanist works to showcase. While some votes with go to PATHER PANCHALI, DAYS AND NIGHTS IN THE FOREST, DEVI and THE MUSIC ROOM, this shattering film would surely be named by a sizable critical contingent as the master's piece de resistence. Madhabi Mukherjee is extraordinary (as is Soumitra Chatterjee) and there are some magnificent scenes.

Thanks a lot Sam. Yes, Charulata, along with the ones you mentioned, rank among Ray's best works. But there are (at least) 3 more that I'd add to that venerable list - Apur Sansar (The World of Apu), Nayak (The Hero) & Goopy Gyne Bagha Byne (The Adventures of Goopy & Bagha), the latter being my personal favourite of 'em all.

Hey Shubhajit, congrats on 500! You've highlighted a director I need to spend more time with. I've only seen The World of Apu. I need to dig deeper into his cinema.

Thanks Johny. Yes, do explore his films. As I mentioned, he's my favourite filmmaker.

One of our favourite directors happen to be Ray as well.Charulata was a realistic portrayal of the breakdown of a marriage.Nobody was bad in the film and no one wanted to hurt anyone.Yet in life we end up hurting those we care about the most.The husband had no idea he was neglecting the wife.The wife never intended to cheat.Ray's work had a feel that you are actually watching your life unfold.As always,your review is creme de la creme,buddy.

Thanks a lot buddy. Yes, I know about your liking for Ray's cinema. As for me, I'm a huge fan, but I guess you already know that. Indeed, the chain of actions that transpires in Charulata was portrayed with subtlety and realism, thus making the characters incredibly real and the climax so quietly devastating.