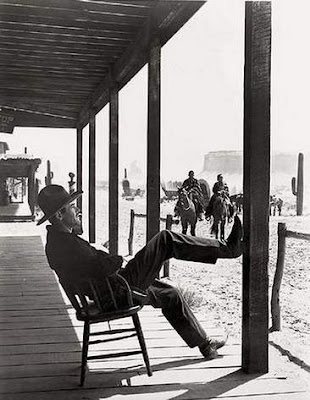 Though the likes of Sergio Leone, Sam Peckinpah et al are revered for their Westerns, when it comes to one name vis-à-vis this quintessential American genre, the choice is usually very simple – John Ford. And his My Darling Clementine, along with his The Searchers, Stagecoach and The Man Who Shot Liberty Valence, rank among the greatest Westerns ever made. One of the many retellings of the Wyatt Earp legend that eventually led to the legendary shootout at OK Corral, the film had Henry Fonda playing the role of the iconic former lawman-turned-cattleman. Upon reaching a shanty town called Tombstone, his cattle are stolen and his youngest brother is murdered. He quietly vows to avenge, and takes the job of Marshall to take the notorious, smooth-talking Old Man Clanton and his sons down – one way or the other. The film is however not just about the feud, as it was enriched through the inclusion of some fine characters, not the least of which being a fatalist, self-destructive, Shakespeare-quoting loner called Doc Holiday, and the two women in his life – the hot headed beaut Chihuahua and the beautiful lady from his past, Clementine (who Earl starts developing a soft corner for). The film opens with the soulful ballad “Oh My Darlin’ Clementine”, and maintains a sense of poeticism and light-heartedness throughout its crisp length, despite the harsh, rugged and unforgiving terrain where the story is set. Lovingly paced, filled with well-delineated characters and great off-the-cuff deadpan humour, this gorgeously photographed film on how the West was won, remains one of the great American masterpieces.

Sometimes I forget about this one when thinking of the best westerns ever made, but you've nailed it here and it's clearly a masterpiece by a director with a passion for the genre. As far as directors working within the western genre, I would also throw in Anthony Mann as he has a unique vision of the West as well. I'm thinking of The Naked Spur and other collaborations with Jimmy Stewart.

Thanks Johny. Yeah, this one was a masterpiece alright. But yes, as you pointed out, it loses out to some other Westerns in popular appeal. As for Anthony Mann, unfortunately I haven't seen much of his Westerns. I guess that's one of numerous things that I need to correct. :)

I think Anthony Mann's westerns are sort of noir-westerns in that they are westerns that start to break down the archetypes or traditional western motifs and incorporate lead characters with sketchy backgrounds and behaviors. It has been noted on numerous occasions that John Ford was influenced by Anthony Mann when he created John Wayne's character in The Searchers. Probably The Naked Spur is Mann's best one but they're all really interesting and begin to establish the revisionist Western that would become the norm in future decades.

Thanks Johny once again for the great info. Yes, from what I too have heard, the Westerns made by Anthony Mann were indeed Revisionist Westerns, and set the pattern for the more wicked, ambiguous & revisionist works by Sergio Leone et al. Though I have watched some of his noirs, his "noir-westerns" as they were called are still part of a gaping hole in my movie viewing. Given your strong recommendation for The Naked Spur, I've planned to start correcting that with this much acclaimed Mann movie.

I've just seen this one too and loved it - I think it is probably my favourite so far that I've seen by Ford. That whole scene with Victor Mature as Doc and the drunken Shakespearean actor is just astonishing. When I saw you mention this one at WITD, Shubhajit, I hoped you would be reviewing it, so glad to find that you did.:)

Great to see that both you and Judy have watched this on the same week, Shubhajit, and have come back here with the hightest rating. My favorite Fords are THE GRAPES OF WRATH, THE SEARCHERS, STAGECOACH, HOW GREEN WAS MY VALLEY and THE INFORMER, but this terrific work would push very close. And some have regularly cited it as their own favorite Ford. Great that yopu mention here all the qualities that make it the movie milestone it is, including the deadpan humor, the gorgeous cinematography (by Joseph MacDonald) the legendary performances, and Alfred Newman's memorable score.

This is a superb piece of writing.

Yes, the interaction between the alcoholic, self-destructive & Shakespeare-quoting Doc and the Shakespearean actor was really memorable. Thanks a lot Judy for stopping by and sharing your appreciation for this terrific Western.

Thanks a ton Sam for the good words. Well, my viewing of John Ford movies has been limited as of now - one of the many gaping holes in my film viewing. But I have time to correct them, I guess :)

Anyway, I quite liked Stagecoach. But, that said, I'd place this one higher. As you too agreed, the various facets of the film, ranging from superb acting and great use of deadpan humour to stunning photography, combine to impart a sense of melancholy, beauty and power, all combined, to the movie.

ok, a 5 star masterpiece for you! I like the image in yoour review. Don't usually go for westerns,I've also been recommended this by another blogger, I should probably get my hands on a copy.

Is the title a song sung during the movie?
From Eternal sunshine of the spotless mind I remember Clementine(Kate Winslet) sing oh my darling clementine in the train scene. More recently , I love the 2010 song Clementine, by Sarah Jaffe

Well, do grab a copy of this John Ford classic, as it indeed is a masterpiece. Yeah, the film got its title from the famous ballad "Oh My Darlin' Clementine". In fact, the ballad is played during the opening credits itself. Its another matter though that the name of an important character in the movie is also Clementine - incidentally first the darling of one of the 2 male protagonists, then the other.