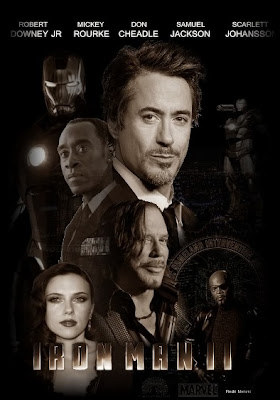 Jon Favreau’s sequel to his Iron Man is an equally romping, big-budget summer blockbuster, but without the breath of fresh air that made the first part such fun to watch. I’m not saying that Iron Man 2 isn’t a fun watch per se. Hell, it sure keeps one tied to his seat for the duration of its running length, but never provides the kind of wacky enjoyment that the earlier film showered in abundance. The problem with the movie lies in an over-abundance of half-cooked subplots – Tony Stark getting to know his father, the political fallout of his armour suit, Stark failing to maintain his sanity amid all the hullaballoo, dirty rivalry with a fellow tycoon, and of course, reluctant collision with his Russian nemesis in a revisit to the cold war era. Further, the movie has also criminally under utilized such actors as Mickey Rourke and Samuel L. Jackson. Apart from Robert Downey Jr.’s crackling performance as the egotistic, narcissistic billionaire genius, the few other noteworthy aspects of the movie are the reasonable humour quotient, Sam Rockwell’s ludicrous little jig before presenting his innovations, director Jon Favreau’s comic turn reminiscent of his similarly hilarious role in the Friends series and the ACDC soundtrack.

Stellar appraisal here right down the line on just about every point. I saw the film over the weekend, and after a while I completely lost interest, even while it bears many similarities as the first installent and yields the same kind of simplistic entertainment.

Thanks Sam. Iron Man 2 wasn't really bad, rather a disappointment after the far superior first part. Same is the case with the second part of Millennium Trilogy.

A pleasantly entertaining enough film, I agree that this was still a disappointment. It tried so hard to setup the Avengers that it never really advanced its own universe.

Exactly. Completely agree with you on that.