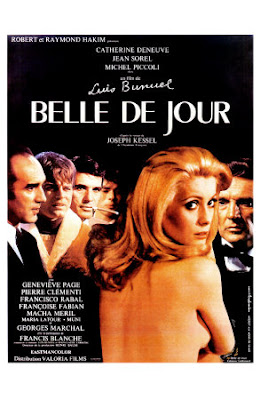 Belle de Jour might or might not be Spanish provocateur Luis Bunuel’s finest film, but it remains without any semblance of doubt his most famous work. A satire on social fabric and human behaviour, the movie blurred the not-so-thin line between bourgeois affluence and elegance on one hand, and depravity and moral decadence on the other. Catherine Deneuve, like her character in Polanski’s Repulsion, is a frigid girl-woman whose fragile and soft demeanour masks and not sure of what she really wants; only that in a not-so-subtle variation, she takes a radically different approach to give vent to her internal fantasies and frustrations. Thus, while by day she is Severine, a beautiful and wealthy newly married lady suffering from ennui, by, err, afternoon, she becomes “belle de jour”, a high-society toy or bimbo for closet perverts. Despite the suggestive storyline, the movie never veers towards anything saucy or exploitative. Instead, the movie, which freely alternates between reality and supposed reality, is a sly take on alienation, forbidden pleasures, and the intense human desire of being what one is not by acting out, either in person or through elaborate dream sequences, one’s most lurid fantasies. Bunuel held us a puzzle that is Catherine’s unfathomable mind and took great pleasure in not unscrambling it for us – that, for me, is the defining feature of this film.

It is amazing that no one seems to get this move!
There are flash-backs where Séverine Serizy (Catherine Deneuve) was sexually molested as a child.
The movie is about the effects inappropriate sexual contact or incest have on a child.
Children's sexuality is getting perverted as the children get getting conditioned to feel dirty at the same time they are sexually aroused.
Later on in live, they can only get sexually aroused if at the same time they feel "dirty" or "in danger," or find themselves in any other Inappropriate situation that was present at the time of the abuse.
I have yet to read a critic that even mentions the true "plot" of the movie.
The movie is about the struggle of an incest survivor or a girl that was sexually abused later in adulthood and her inability to experience sexuality in a normal way.

Thanks Peter for that brief. I have read at a number of places what you've said here - about her icy present being a result of sexual molestation she faced as a child. You've also mentioned an interesting thing about her need to feel dirty or in danger to be aroused.

There are however two catches with what you've said:

1) The sexual molestation angle hasn't been shown with an obvious or tangible sort of way, it was too subtle an implication. So it boils down to how you decide to construe that implication.

2) And most importantly, Severine's mind is something that can hardly be relied upon. She may as easily be schizophrenic or fantasizing that she has had a "dirty" past. Thus it might as well be a figment of her fantasy. And given the surreal nature of the movie, in terms of how the narrative slips in & out of fantasy, one can never be sure as to what really happened to her.

Thanks for your impassioned argument nonetheless.

I was only 16 years old, when this movie played in the cinema “Wellenberg” in the “Niederdorf,” a part of Zurich Switzerland. I was passing by the Wellenberg cinema several times a day and stared at the movie posters on display with Catherine Deneuve each time I passed by. I was too young to see the movie, the minimum required age was 18 years. I do not remember when I saw the movie finally for the first time; it must have been on television in Switzerland many years later.

I did not “get” the movie until after I was involved in a three year relationship with a woman that was the victim of an extreme case of incest, (her grandfather on her mother’s side). I was “living” it from the perspective of Severine’s husband and tried to make sense of it all. I read many books on the subject. The best book, and the one I recommend to everybody interested to learn about the effects of incest and find answers to the seemingly contradictory behaviors, is, “Incest and Sexuality,” by Wendy Maltz. The relationship with this woman ended when I was 50 years old. Somehow I remembered “Belle de Jour” and bought a copy on Ebay to watch it again. As I said, it was only then when I finally understood the movie.

Now to your remarks, (this is not about being right or wrong, it is about furthering the understanding of Bunuel’s work and his genius to portray the complex and perverted sexuality of incest survivors and their struggle with intimate relationships because of it:
1) For those familiar with the effects that sexual abuse has on children, the “too subtle an implication” you mentioned is not even necessary to recognize Severine’s behavior and her past that causes it. The question is why Bunuel included the flashbacks. Did Bunuel attempt to give hints? If so, I didn’t get it despite the hints; after I learned about incest and its manifestations, I didn’t need any hints to “get” it.
Besides the hint about the sexual molestation you mentioned, there is another hint. In one of the flashbacks, Severine, as a young girl, was attending a mass in a Catholic Church. She pressed her lips, shook her head, thereby refusing the wafer given by the priest during communion.
Incest survivors wrongly blame themselves for the abuse and are tormented by guilt. Severine felt she was not worthy of the waver and refused it.
Everybody willing to take the time to read “Incest and Sexuality,” and then watch “Belle de Jour” again, will recognize the genius in Bunuel. Incest survivors can only enjoy sexuality with partners free of emotional ties. This is especially the case if the perpetrators were members of the family or familiar individuals. In “Belle de Jour,” Severine was able to engage in physical intimacy with her husband at the time she started to drift away from her husband and got emotionally close to Marcel. As she got emotionally close to Marcel, she lost her ability to experience physical intimacy with Marcel, hence her departure from the brothel.
I can’t stress enough the fact that conditioning during early sexual encounters is very powerful. If early sexual encounters are appropriate, this is a good thing. Unfortunately, conditioning also works in the same way if early encounters are inappropriate or abusive. As Severine felt dirty, in pain, in danger, etc while she got sexually stimulated during the abuse, she has to re-create the inappropriate situation again in adulthood to get aroused.

2)Your attribution of “schizophrenic” traits are speculative at best. Severine’s behavior with all its - to the uninformed - confusing properties, is a horn-book example - to the informed viewer - of a sexually abused girl; hence my claim Bunuel’s work to be that of a genius.

Interesting review, I didn't realize when I watched that some of the scenes might be dreams. I think it's one of those films you need to see several times, there are many interpretations.

I read these were influenced by the movie:

Thanks a lot Peter for being kind enough to post such an in-depth explanation of your opinion.

You obviously know far more about this subject than I do (which, anyway, is preliminary at best). So I can't thank you enough for illuminating me about this disturbing aspect.

The fact that the subject has/had a personal connect with you certainly makes your points that much more eloquent & the impact of what you've said far more than just palpable.

In the light of what you say I feel I'm now in a position to reassess my earlier stand and incline towards your line of thought.

I'll look forward to have you visiting my blog more often in the future.

Thanks. I agree with what you've said.