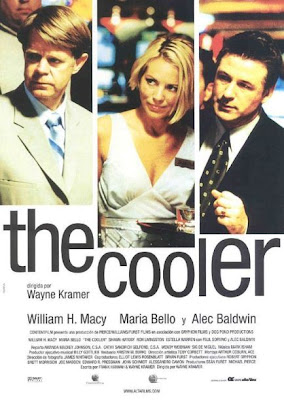 The Cooler is about casinos, money and luck (or rather the lack of it); but more than anything else it is a warm-hearted movie on love, and how it can flourish and survive even in a world as cold as Las Vegas. Bernie is a loser, if there ever was one. His luck is so rotten that he has been hired in Shangri-La, run in the old-fashioned way by its owner Shelly, as a “cooler” – his job is to rub off his bad luck onto anyone who is on a winning spree. And then he meets Natalie, a cocktail waitress at the casino, and as they fall in love, his luck suddenly starts changing for the better. There isn’t anything new that the story has to offer. In fact, at times it even veers towards been-there-seen-that territory. But what ultimately has made this movie watchable, hell, likeable, is the truly memorable acting. William H. Macy as the good-natured but tragically lonesome loser, Maria Bello as the outwardly seductive but inwardly fragile “lady luck”, and especially Alec Baldwin as the tough son-of-a-gun who loves his casino to death and runs it like a Scorsese-style mobster, but with a heart somewhere deep within, have given some of the best performances of their distinguished careers. The characters of this impressive, if fanciful, little indie, too, have been well etched and realised.

Shubhajit, I regarded this as a mild diversion, and I'll admit it has left my memory banks. Ha! Yet, I can't argue with you for noting the charismatic performances, which for the most part sustained the film, and and made it a fair enough entertainment. You hit all the right chords here as usual.

Thanks Sam. Yeah, this is a nice little film that is easy to escape from one's mind - so I wouldn't hold anything against you for that :) But made for a pretty satisfactory viewing alright.