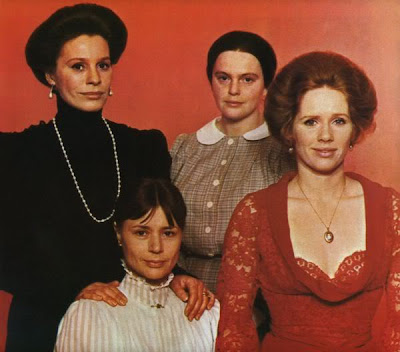 In Hrishikesh Mukherjee’s timeless classic Anand, Amitabh Bachchan’s character quoted, “Death, you are a poem.” In Cries and Whispers, Swedish master Ingmar Bergman created a solemn and melancholic yet spellbinding poetry on the otherwise morbid subject of death. The frail Agnes, who is afflicted with cancer, in on deathbed at her palatial manor house, and her continual suffering forms the unlikely bridge between her estranged sisters – the suicidal and tortured Karin, and the shallow and cold Maria. Meanwhile Agnes is taken care of by her motherly maid, Anna, with undying love and devotion. All the three ladies serving the whimpering and dying Agnes, have had unpleasant brushes with death, and lead deeply scarred existences, though carefully masked by misleading, sociable veneers. Intense grief, pain, sexual repression and skeletons in one’s closet form the principal themes of this tragic, albeit lushly beautiful, human drama. Though visually enthralling – expressionistic compositions, colours and imageries play far greater roles than mere words, the film can be emotionally distressing for most viewers, and the slow pacing is as unsparing as it gets. This deeply personal tale benefited from a great cast, with especially stupendous and devastating performances by Ingrid Thulin, Liv Ullman and Harriet Andersson.

This is the first film I felt like I describe as perfect. It's everything film can, and should be.

If you want to see the worst paced Bergman movie EVER, check out The Silence.

PS - I've never even met anyone in person who's seen The Apu Trilogy. Glad to see it in your top 100.

The movie came close to being perfect for me too. I loved the pacing, though I'm certain it'll bore the hell out of most.

And well, I haven't just seen Apu Trilogy, but barring a few here & there, the entire filmography of Satyajit Ray, cos he's my favourite director :)

Thanks for stopping by.

My good Indian friend Kaleem Hasan turned me on to Mukherjee's ANAND two years ago, and I can appreciate that connection here. Actually Shubhajit, I feel there are a quartet of electrifying performances on display in this beautiful, jolting and mesmerizing film that raised the bar at the time of it's release for film artistry and psychological familial discord that erupts here in piercing glances and night time whispers. The color red is used to powerful effect, capturing as it does, the human soul.

Your superlative work here in assessing the themes of the film is exceedingly impressive.

For me it's undoubtably one of Bergman's masterpieces, but I know some will turn away, even with that almost unwatchable scene with Ingrid Thulin and the shard of glass. This is the great Sven Nykvists's most magnificent turn as director of photography.

Yeah, the colour symbolism has been used with fascinating effect. In fact there's red everywhere in the film, from the drapes to the fadeouts, which lent such a haunting yet earthy feel to the film. And as you mentioned, the film was taken to a different plane altogether thanks to the string of electric performances.

As for the "unwatchable" scene you mentioned involving Thulin, the scene might easily have been an inspiration for the similar scene in Haneke's Piano Teacher.

And as for Anand, did you get to watch it? Its a simple yet beautiful movie.

Love the photo, thought I'd add a note here. It's likely those open clearing you found are ash dumps.I do not know why I said it!