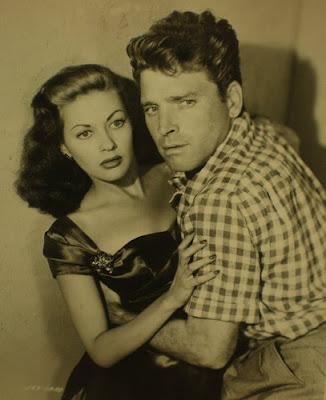 Made a couple of years after his masterpiece The Killers, Robert Siodmak’s Criss Cross bears a number of resemblances with the former – ranging from plot and structure to tone and mood. Though it doesn’t touch the flawless brilliance of the former, it happens to be a damn good piece of film noir alright. At the heart of the movie lies the doomed romance between Steve, working as an armoured-truck driver, and his former wife Anna, who’s now the girl of a notorious gangster. The three form an uneasy company as Steve hatches an impromptu, unheard of heist plan. But complications ensue in the form of distrust, betrayal and double cross, and the film ends with one of the bleakest climaxes that one could hope for. Burt Lancaster is devastating in the role of the tragic hero, while Yvonne De Carlo, though never as duplicitous as Ava Gardener’s Kitty Collins, is also good as the incredibly beautiful and self-serving femme fatale. The most unforgettable part of this grim, fatalist and downbeat movie, for me, is the stunningly composed sequence where love-lorn Steve finally gets to see Anna, dancing in the seedy drinking hole he frequents, with complete abandon, against some terrific jazz music being played by a band – that scene just tore my heart apart.

After Dave's Film Noir Countdown, I watched both The Killers and Criss Cross back to back. I had never done that before with these two Siodmak films. I was struck by how much better The Killers seemed to me. I always figured both were much closer in greatness. I love both movies but I must admit that the earlier film has moved further ahead in my admiration......M.Roca

Ah Shubhajit, Dave's spectacular noir countdown has really made its mark on you, as it has on Maurizio and myself, and I can see what motivated to watch CRISS CROSS again. You've again used word economy to superlative purpose, as you've basically stated why this is such a gripping noir and one of the true classics of the genre. It's close for me as Siodmak's greatest film, though I've always had that childhood affinity for THE SPIRAL STAIRCASE. I know others (like Maurizio) prefer THE KILLERS, but it's close among Siodmak's stellar output.

Yes, I'm completely with you on that The Killers was a better movie than Criss Cross. Further, because of the obvious similarities between the two, one can't help but compare the two, thus realising that the former comes out a clear winner. But comparisons aside, like you, I too loved Criss Cross quite a lot. Thanks for your valued opinions.

Thanks a lot Sam for the good words, you're really too kind. You're right, Dave's terrific noir countdown has acted as a big motivating factor for me, and I'm on a noir watching spree, if you can call it one. I haven't watched Siodmak's The Spiral Staircase, but your overwhelming enthusiasm for it means I'm already on the lookout for it :)