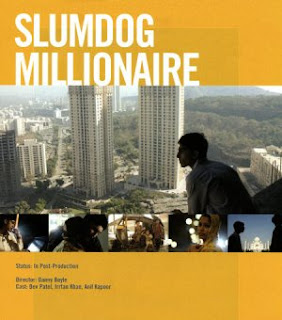 Slumdog Millionaire could easily have been the cinematic equivalent of ‘Slum Tourism’. However, despite the graphic detailing of the dark underbelly of Mumbai, the commercial capital of , the movie has come out with a content that far surpasses the physical displays of poverty, slums and crime. Brimming with hope, humanism and humour, this Dickensian tale of an underdog, who, with a basketful of street-smarts and infinite love for his childhood sweetheart at his disposal, makes the incredible journey from hell hole to "hot seat", and experiences every possible kind of joy, heartbreak and horror in the process, is a grim fairy tale and an ode to life itself. Danny “Trainspotting” Boyle, has shown his amazing ability to capture a place and its inhabitants without diluting the contents; in fact I can recall of only a handful of Hindi movies, like Parinda and Satya, that succeeded in painting the city in such striking detail. Boyle’s tour-de-force direction has been aided by terrific camera work, an expressionistic splash of colours and images, hyper-kinetic narrative (making terrific use of flashbacks), and a thumping score by A. R. Rehman. Right from Dev Patel’s restrained and mature performance and Anil Kapoor’s sleazy and wisecracking game show host, to every single support and child actor employed, the acting is first-rate and the characters very well delineated.

To read a more in-depth review of the movie by me, click here.

Although, I enjoyed the movie, but in the end it made me sad- " Why couldn't we come up with something like this"...and to read in papers and media about the glorification of the " Indian context" makes things even sadder. I guess history is the witness to such an event from Gandhi to Slumdog Millionaire.

Yeah, I totally agree with you. I hope the Karan Johar-s and the Yash Chopra-s watch this movie...

The KJs and YCs of the industry can never take a leaf outta this film, try as they may, although Madhur should take some pointers!
The USP of the film surely had been the child-actor support, and the fairytale saga of the protagonist to reunite with his sweetheart; the ending strangely reminded me of the bleak, sudden end of American Beauty...

You're right, the KJs and the YCs traverse a different alley of Bombay altogether. And the problem with Madhur is that he tries a tad too much to make his movies seem 'real'. The reality must be natural and not forced.

Yeah, the child actors are indeed one of the USP of the film - they are so unbelievably natural.

The ending reminded you of American Beauty you say? Well, I don't know whether I'm on the same page with you on that one.

Spot on review, once again, my friend.
I was curious as to what folks from India would make of this movie. Honestly, I was brought down by it a lot of the time and might not have been able to say I enjoyed it if it hadn't ended so wonderfully. It was with a ... uh ... an almost Jesuit rhetorical power, let's say, that the ending (even though one knew/hoped it was coming) seemed to bring all that preceded it back into a healthier light. I don't know. Something like that.

ahhh ... you already saw this,
HOW???
I'm impatiently awaiting it's release.

@Sitenoise - Thanks buddy. Though I'd heard a lot about the movie, most of the sources weren't from this part of the world. Consequently i was a tad skeptical. The reason being, as i mentioned in the review, the ridiculously filthy trend these days for what is known as slum tourism, where people actually pay heavy dough to visit slums, with Dharavi (the slum shown in the movie) being the destination of choice! But the fact that the human aspect of the story far outweighed any other parameter really gladdened my heart. And Danny Boyle being the director, one couldn't really hope but like the movie.

@Adrenaline - where there's a will, there's a way... wouldn't you agree?