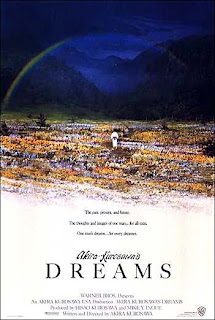 Though often dismissed as pompous self-indulgence borne out of senility, Dreams nonetheless deserves a watch as much for its visual poetry as for the philosophical overtones of one of the greatest masters of world cinema – Akira Kurosawa. Comprising of 8 loosely connected dreams, semi-autobiographical vignettes if you will, the movie has covered a plethora of subjects ranging from superstitions to surreal explorations, from deforestation to the futility of war, from nuclear holocaust to a post-apocalypse, from hopelessness to celebration of life. Some of the best shorts here, like the one where Martin Scorsese plays Van Gogh (arguably the best of the lot), the deathly portrayal of Japan’s militaristic past, the one with the sublime animal dance, and the marvelous final short set in an utopian village, are those which manage to tread the fine line between philosophical overtures and moralizing. Things, however, get hackneyed and avoidable in the ones where Kurosawa couldn’t help being overtly didactic. On the whole this is a unique, albeit an inconsistent, experience.


p.s. By the way, is the elaborate dance sequence of forest gods and goddesses in the second short a subtle tribute to the legendary ‘dance of ghosts’ scene in Satyajit Ray’s timeless fantasy movie Goopy Gaine Bagha Baine (The Adventures of Goopy and Bagha), considering the fact that Kurosawa and Ray had immense mutual respect and admiration for each other? I'd love to know if others (i.e. those who've seen both the movies) feel the same way as I do.

This is one of the earliest Kurosawas I watched. And one of the most intriguing ever. I had never watched plotless cinema before but this one was a revelation. This is a new film every time I watch it and my favorites change every time.

First it was sunshine thru the rain, then tunnel, then it was crows, then it was village of the watermills and now it is blizzard...

That means you've already watched it 5 times? Jokes apart, you're right, though not a resounding success, only a Kurosawa could pull off such a challenging project. In lesser hands, it could easily have become excessively experimental.

The two shorts on nuclear holocaust are the weakest links in my opinion.

I've watched it 3 times actually. The opinion changes in retrospect.

Those Nuclear age shorts were probably the fear of the country during that time. I mean, you see how deeply the people remember Hiroshima when you see Rhapsody in August. (I may be taking an outsider's view, but the film remains still potent). Quite bleak they were exactly like a nightmare.

@Jack - Well, don't think its a classic, but a damn interesting effort nonetheless.

@Seventh Art - I see what you mean, and I agree with you. However, the thing is, shorts need to have a far tighter leash on the didactic front vis-a-vis feature films. Those two shorts, if converted to full length feature, could make for a compelling watch (perhaps like 28 Days Later). But being shorts, they ought to have been more subtle and less verbose.

The film reminded me of the good, rare creations, needing thinking after seeing to feel them.
Admonitions can hardly be non didactic, which would make them more unclear.
Nuclear bombing was probably the most serious event during Kurosawa's life, and his anxiety about environment is now justified.
As if all subjects were autobiographic (?) and sensibly treated.