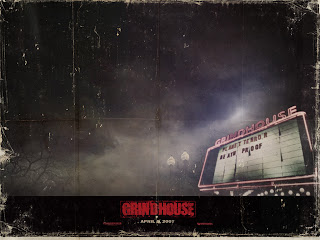 Grindhouse is a no holes barred homage to the sleazy, low-budget, ultra-violent, Z-grade slasher films and exploitation pics (in essence, B-movies) that maverick filmmakers Robert Rodriguez and Quentin Tarantino feasted on, in run-down single screen halls (grindhouses), during their days of growing up. Planet Terror, directed by Rodriguez, which forms the first segment of the kinetic double-bill, is a post-apocalyptic dystopian tale of tussle between ravenous zombies and humans. Though mercilessly gory, the movie has enough smart-ass action and wry humour to get blood racing. The second feature, Death Proof, directed by Tarantino, and arguably the far superior of the two, has a psycho stuntman (played to perfection by Kurt Russel) who loves taking down his beautiful victims while driving at 125 mph. Though the more sedate of the two, this is no less thrilling, and is filled to brim with high-octane virtuosity, pop-culture references and enormously engaging ‘Tarantino talk’, as they say. And boy, does Tarantino have a thing for dancing! First there was the chilling ear-cutting sequence in Reservoir Dogs, then the cool Saturday Night style Travolta-Uma Thurman tango in Pulp Fiction, and now the awesome lap dance scene in Death Proof. In order to get the feel right, the editing and film quality have been deliberately made to look crappy, the content is as politically incorrect and gleefully shocking as humanly possible, and to top ‘em all, the features are punctuated by some bizarre faux-trailers. Though an empty stomach is a prerequisite for watching Grindhouse, this is one hell of a fun ride down memory lane.

Remember the 70s in Bollywood? Remember any of the movies out of - "Bond 303"(Parveen Babi-Jeetendra-Helen), "Suraksha" (Mithun) , "Nagin"(with everyone who was alive then), "Jaani Dushman" (Sanjeev Kumar)? In that same period, a movement of B-grade "exploitation films" (exploit the animals, sex, females, lesbian vampires, nazi nymphomaniac prison warden etc) were running the pop sub-layer of Euro-American films. Remember "Cannibal Holocaust" or "I spit on your graves"? Movies that came in at least 5 years late to India and caused a lot of that last bench whispers among people like us? In US, those movies were shown, often back to back or in a series of 3 to 4 together in a night, in slightly seedy, cheap downtown movie theaters called "Grindhouse".
Quentin Tarantino and Robert Rodriguez grew up on a spew of grindhouse movies. Most of QT's work is nothing but a solid grindhouse movie packed with much better dialogue, superb acting, state of the art action sequences and a unique rubber stamp of his direction on all frames that screams "guy movie with class".

You're right, B-movies were as rampant in India as elsewhere. Quite uniquely, lot of Indian B-movies (including the ones you mentioned) had popular stars, though a key criteria for B-movies is that they don't usually have any A-list stars. Of course, B-movies also include what we usually coin as Z-grade movies; cheap horror/dacoit movies were especially popular in India.

These movies, though, are slowly getting phased out, primarily because single-screen halls are finding it increasingly difficult to survive. Hence, for people like Tarantino, who seems to have an encyclopedic knowledge on B-movies in particular, this is a matter of great nostalgia and sadness.

Your summation of QT movies is quite apt, though, in my opinion, he's much more than just a guy's director. And this is for the simple reason that he is too good a filmmaker to be classified by so simple an epithet.

@shubhajit
Grindhouse is not only a movie made from other movies, it is a bent-knee homage to all B-grade movies ever made anywhere.
I am not saying all movies of QT and RR is shit ;Pulp fiction and Reservoir dogs are great stuff but did bot like to watch this movie as a whole full of pimp and cheap goons.

Hello!
It is interested very much.
Please link to this site.
http://drama-animation-free.blogspot.com/

i just came to tell you that YOURS is one blog I am really interested in reading.. Today I had a fight with little girl lost Amritorupa because she was rude to me since she did not like my limerick on her. She is now going around and telling all her friends that I am a sex maniac who stalks girls and I am 53 yrs old.. since so far she has not copy pasted her nasty message to you.. probably.. I will not copy paste her email to me first giving her email to chat on gtalk and then my 3 days chat with her. here in the comments... . where the first day itself she saw that I have 57 in my mail address and asked and i told her yes it is my DOB.. so it is all lies from the beginning.. all I did was write poetry on her and nothing privately either.. Yes I felt attracted by her eyes! but where is the sex in that! She is crazy!! Anyway..

Anyway.. she can come here and tell you to block me and if you are her offline friend then you will block me.. but if you are not then I wld like to be here bcs I am an english movie fan..

Rest of our quarrel I will not bother you here.. and if you block me then also no probklem

Other followers of her may or may not block me.. I least care.. as u can see I am older.. and have been here since 1994 -surfing. first time this has happened to me!

i loved the fake trailers and the missing reels part...genious!!