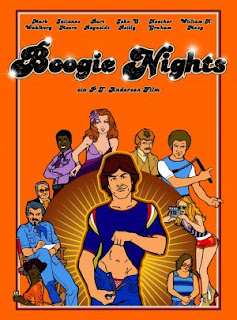 This epic, ambitious, satirical and bold-as-hell comedy-drama by Paul Thomas Anderson (his second feature following his decent debut film, Hard Eight), laced with satire, fun and warm nostalgia, recounts the story of a business that everyone loves to hate and yet the world can’t seem to be able to live without – the porn industry. The huge ensemble star cast comprising of a fine bunch of character actors (including regular John C. Reilly), wonderfully brings out of the closet the actual lives of porn stars. They might have turned their bodies into commodities and sex into mechanized rote, but they have their lives, dreams and heartbreaks as well. Filled with innuendoes, a very broad scope, elaborate shots, and a fluid narrative, this is a very engaging movie. Mark Wahlberg, the latest recruit thanks largely to his generous endowment, along with the motherly Julianne Moore, the cuckolded William H. Macy, the manic Heather Graham, the patriarchal Burt Raynolds, the overtly gay Phillip Seymour Hoffman et al, who’ve all been there and done that (pun intended), have managed to present a colourful, delirious, obsessive, and a continually evolving world, that, to the consumers, is filled with clichés, and provides the outside world equal amounts of attraction, pleasure, curiosity and rabid derision.

As a cinephile, I have a weakness for the long take, and if it’s a well done plan- sequence then it more than sweet. I got introduced to his films fairly early, thanks to Darjeeling; however, only later in years I realized the importance of dynamic camera movement and its relationship with the subjects and surrounding in his films. So whether it’s the opening choreographed shot or the one done with the tinge of influence from I am Cuba, he is definitely one of the new age auteur of American Cinema. There are moments in the films that are so hard to forget yet the ensemble cast, the narrative, all flow with such harmony that it makes it all look so easy and cool. He is definitely one cinephile who understands that its not just about being ‘ influenced’ or a story that carries one to achieve a distinct voice, but more of, taking the influence and making it your own- that’s where the magic lies and PTA films are filled with such moments.

I agree, Anderson is very much in the mould of an auteur. He has a very distinctive style of filmmaking, thus making his signature quite recognisable. His subject matters too are well-chosen and intriguing in equal measures. He also a sort of fondness for talented character actors who otherwise feature in fringe roles - case in point John C. Reilly.