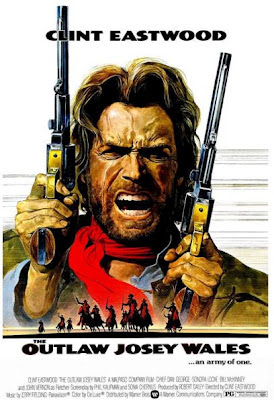 Clint Eastwood attained iconic status for his laconic ‘Man with No Name’ persona in Sergio Leone’s legendary Spaghetti Westerns, viz. the Dollars Trilogy (especially The Good, the Bad & the Ugly). No wonder traits of the character abound in the protagonist of the fine but underrated The Outlaw Josey Wales (the brilliant deconstructionist Western Unforgiven aside, possibly Eastwood’s best directorial venture). Set just after the Civil War, the film begins with the titular Josey Wales (played with deadpan élan by Eastwood himself) as a helpless witness to the brutal massacre of his family and home. With his chance for peace shattered forever, the scarred and laconic Wales begins a singularly single-minded and near-psychotic journey for revenge and retribution, reminiscent of the Ford masterpiece The Searchers. Ironically, he also becomes a hunted by the same person he’s hunting for on account of his refusal to surrender before the Union soldiers when his fellow (and unwitting) Confederate soldiers do so. As his life turns to one of constantly being on the move in order to stay alive, he experiences carnage and brutality on one side, and friendship and love with the unlikeliest of people on the other. Despite the film’s violent content, intense tone and a general sense of amorality and anarchy dominating the protagonist’s actions, the film also abounds in moments of warmth, humour and humanism; most notably, Wales is always guided by a strong sense of right and wrong, even if they’re morally questionable. The script’s dry wit, fine photography and a number of good supporting turns further added to the low-key, well-made film.

Shubhajit, this certainly must be counted among Eastwood's greatest films, and it's one that holds up beautifully on re-viewing. The revenge and retribution theme has rarely been so intoxicatingly negotiated. Terrific capsule here!

Yes, indeed. Clint did portrayed the inherent violence in the movie's theme with great competence - without ever losing sight from the basic storytelling. The best part of the film, in my opinion, was that he managed to wonderfully marry the classical patterns of Westerns with the darker tones found in their revisionist counterparts. Thanks Sam for sharing your views on the film.