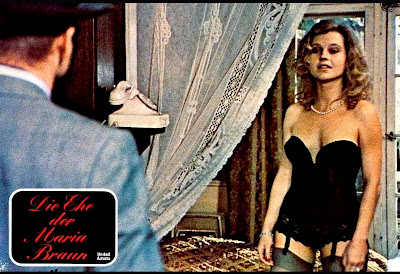 The Marriage of Maria Braun, considered as one of R.W. Fassbinder’s greatest works, was a landmark film in the New German Cinema movement. Interestingly, it shared many similarities with his magnum opus Berlin Alexanderplatz – nearly same set of actors, and visual design mirroring one another. The first in his BRD Trilogy (also comprising of Veronika Voss and Lola), the luxurious film was a chronicle of a charismatic, independent-minded woman in post-WWII Germany. She, in extension, becomes a parallel to the changing fortunes of the country itself – how the war-ravaged nation renewed its journey towards economic leadership position. The film begins on a darkly humorous note – the titular Maria Brau (Hanna Schygulla) getting married with debris flying all around her on account of bombing by the Allied forces. When Hermann Braun, her soldier husband, is shipped off, she takes a black American soldier as her lover, who her husband, upon his sudden return, murders in a fit of rage. With Hermann in jail, her seductive charm lands her a plum job with a wealthy businessman (Ivan Desny) who, as can be expected, falls heads over heels with her. Though she becomes his mistress, and continues to prosper financially on account of her lethal mixture of stunning beauty, intelligence and guile, she continues to be in love with her imprisoned husband – and this dichotomy gradually leads her towards seclusion, mental implosion and tragedy. The melodramatic tone, hyper-stylized form, deliberate pacing and oftentimes theatrical acting, however, can take one’s attention, to its detriment, from its thematic core and the superb, delicious central performance by Schygulla.

Hanna Schygula is one of the joys of German cinema, and this is certainly her most celebrated performance in a Fassbinder masterwork. Great you mentioned 'hyper-stylized form" and "melodramatic tone" as they do define the particular work and some others by this great director.

Thanks Sam. There are so many films by Fassbinder that I'm yet to watch. But, from the ones that I've watched so far, its obvious he had a signature touch & voice of his own - thus making him an auteur that is at par with his exalted position among cinephiles. But, that said, I feel, to some extent, his films are an acquired taste - certainly not to the extent of, say, Tarkovsky or Godard or even Antonioni - but to some extent nonetheless.