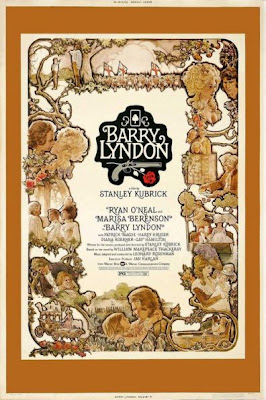 Like so many classics before and since, Barry Lyndon was met with derision upon its release, only to be elevated to the pantheon of great cinema over time. It’s even considered by many as Kubrick’s best work, though I wouldn’t go that far in my adulation. Interestingly, I watched this right after Theo’s The Travelling Players, which had released in the same year – though both were epic in length and scope, and were both sumptuously photographed, they couldn’t be more different from one another. Adapted from William Makepeace Thackerey’s novel, the picaresque story chronicled the spectacular journey of its central protagonist Redmond Barry (Ryan O’Neil) – an amoral, roguish and ambitious Irishman whose rise up the social and monetary ladder is as compelling, as his fall from both is tragic. In love with his cousin, the naïve, rustic Barry ends up being on the run for killing, in dual, the English officer engaged to get married to her. Stolen of everything while on his way to Dublin, he ironically enlists in the English Army. Before long, he deserts, only to get enlisted in the Prussian Army. Expectedly, he deserts again with the aid of a suave and crooked gambler, and this time for good, and fulfills his ambitions by getting married to a wealthy and coldly beautiful Countess (Marisa Berenson). Earning fortunes and social standing, unfortunately for him, turn out to be far easier than keeping them. Gorgeous photography, ravishing production designs and the Classical score, made the film elegance and opulence personified; yet, it was also an emotionally restrained character study, and a bitingly wry and darkly ironic social critique.

I love this movie, especially after I got to see it on the big screen this year. At this point I would say it's probably my favorite Kubrick.

"Like so many classics before and since, Barry Lyndon was met with derision upon its release, only to be elevated to the pantheon of great cinema over time."

Not only like so many classics before and since, but like so many Kubrick films (particularly since, although 2001 also met with mixed notices on initial release). Seriously, every single one of his releases from Barry Lyndon onwards was seen as an intriguing disappointment and then reevaluated. Often the sign of a great director is that their work is so unexpected, so different from what came before and what's coming out around it, that initially people don't quite know what to make of it.

Btw, as I'm moving through your favorite films sidebar I see there's still 3 or 4 you haven't reviewed (pretty notable ones too). Will you be getting to those anytime soon?

Absolutely! In fact his final film, viz. Eyes Wide Shut, continues to remain a mixed bag in terms of appreciation - while some have elevated to the level of greatness, others continue to call it a great disappointment. Yeah, great filmmakers, or artistes to be more precise, often tend to challenge the accepted notions of art, politics, etc. (the status quo in short) - and hence, its no surprise when their works are met with indifference and/or disappointment during the initial stages - sometimes by critics, but mostly by the general populace - as the audience finds it difficult to accept things that need them to move out of their comfort zones.

On a broader level, it would be really interesting to have a look at some of the films, which are now considered as masterpieces, but which met with disapproval (and at times even hostility) upon their release. And interestingly, lots of films meet with a reverse fate as well.

Yes, I haven't yet reviewed 3 of the films in my list of 100 favourite movies - will do so as & when I revisit them, though I'm not sure when.

Thanks a lot Joel for stopping by. I'd be really interested to know your views on the movies which I've place in that sidebar (of course, you've already commented on some) - particularly on the ones which do not find place in the critics' Top 10 or Top 50 that we regularly find on the net.

This would make my Top 10 movies of all-time list to be honest, and it is absolutely my favorite Kubrick (A CLOCKWORK ORANGE is the runner-up) Yes it was not highly-regarded when it first released but it's reputation now has it among the director's irrefutable masterpieces. As you note the individual components are ravishing (the perfectly modulated gun duel is my favorite scene), particularly John Alcott's painterly cinematography and the classical score Kubrick chose. You use word economy to perfection here Shubhajit!

You are one of many people (especially Kubrick aficionados) who consider this as Kubrick's finest achievement. Personally I would place Dr Strangelove, 2001, and probably even The Killing, above it - but that just speaks more about the fascinating quality of Kubrick's small but exquisite oeuvre, than anything else.

By the way, Sam, I'd be really interested to know which other films would make your Top 10.