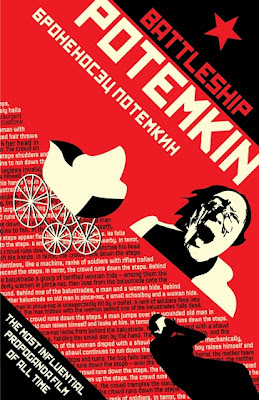 Sergei Eisenstein’s seminal silent era classic Battleship Potemkin is one of those chosen few films that film scholars can’t have enough of, and which no cinephile worth his salt can afford to avoid (at least, not forever) – such is its iconic and larger-than-life position in the history of the medium’s development. Though commissioned by the Soviet Union government, it managed to expand beyond the propagandist confines of an agitprop on account of the role it played in elevating form to the level of content. This frenetic chronicle of the 1905 revolution remains a case study on Eisenstein’s landmark theories on montage editing – the legendary Odessa Steps sequence (where Tsar’s soldiers are shown massacring innocent civilians), in particular, is an icon in itself from that respect. Though crisply timed at just over an hour, the film is a flurry of activities. It begins with the growing discontent among the crew of the eponymous battleship on account of poor food and hygene; and, when confronted in draconian fashion by their brutish superiors, it takes the form of a spontaneous and violent mutiny. The sole casualty among the crew becomes a legend, and the incident goes on to spark outrage and more mutinies, even if the revolution, in the end, was unsuccessful (albeit, not in hindsight). For someone not interested in film study or the role of politics in cinema, this might seem a bit dated, aesthetically “rough”, in-your-face in its ideological expression, and most notably, bereft of any coherent storytelling. In the end, therefore, the vitality of this film in today’s context is principally from an intellectual standpoint.

Yes, larger than life position in the development of the cinema, and a film that has continually ranked among the greatest films ever made by critics and cinephiles. Some of the most famed individual set pieces and a film that helped to established the principles and foundation of the form. Excellent work!

Absolutely, I completely agree with that. This is one of those rare set of films that film scholars and cinephiles alike just need to watch - such is its influence in the pantheon of works that have helped in shaping the medium as well as film theory.