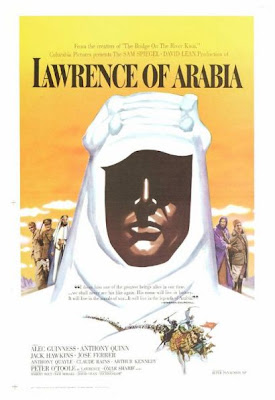 If David Lean is to be considered as one of the greatest British filmmakers, then Lawrence of Arabia, possibly his finest moment under the sun, ought to make a claim for one of the best British movies ever. This sweeping 3.5-hour epic, which chronicled the unlikely bravery shown by one T.E. Lawrence during WWI, remains a stupendous achievement – and one of those rare big-budget blockbusters that actually transcended the near insurmountable barrier between art and commerce. Adapted from Lawrence’s autobiography The Seven Pillars of Wisdom, the movie opens with the glitterati eulogizing him upon his untimely death, without actually ever knowing the man. The rest of the movie took place in flashbacks, and showed, through one exquisitely etched vignette after another, how the cocky, erudite and enigmatic Lawrence (Peter O’Toole), seemingly just another staffer in the British Army, does the seemingly impossible by uniting various warring Arabian tribes under the umbrella of Prince Faisal (Alec Guinness), and plays a monumental role in defeating the Turks, and subsequently in the formation of the Arab Council. Over the course of his spectacular journey he befriends the enigmatic Sherif Ali (Omar Sharif), whose entry ranks amongst the most memorable scenes ever filmed. The film was well enacted by its star-studded cast – the then unknown O’Toole portrayed the complex blue-eyed protagonist with great competence, while Guinness and Anthony Quinn, two thoroughbred Westerners, literally immersed themselves into their roles as Arabians. The film’s orchestra-based score was very well used, but it’s most unforgettable aspect would surely be its incredible photography – the jaw-dropping vistas added poetic touches to the harsh and unforgiving deserts.

Team, possibly my favorite film of all time. One aspect I love (that I don't see praised as much) is the structure. The film begins rather conventionally but as we get to know Lawrence better, and as he is pulled farther into the desert, the style gets more adventurous and the locales more exotic.

This is an inspired capsule Shubhajit, one of your most flavored and trenchant, though all your pieces are exceptional. The film was just voted the Best of 1962 in the weekly polling, and though I didn't personally vote for it, it's still a masterpiece, Lean's most celebrated film, and that most personal of epics. Everything converges here, including Fred Young's ravishing cinematography and the towering Maurice Jarre score with it's great themes. Peter O'Toole is magnificent.

Interestingly, my dad too considers LoA as one his favourite films. In fact, lot of people do, and I can fully appreciate that given the film's majestic concoction of both the grand & the subtle. Though, in my opinion, the film didn't push any boundary in terms of form or structure - but yes, they still do merit a discussion.

Thanks a lot Sam for the kind words. Yes, I noticed earlier today that this has won the top honour in the weekly poll at WitD, and, to be honest, this is one of those rare big budget bonanzas that I do consider as a great achievement - okay, I won't go in that direction any further :) Technically, this film was flawless - I just hope that I get to see it one day on big screen & with Dolby surround sound.