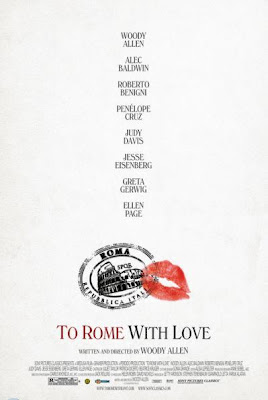 Woody Allen, in continuation with his current romantic trysts with European cities (following Vicky Christina Barcelona and Midnight in Paris), chose the Italian capital for his latest destination for To Rome with Love. He filled the film with a host of neurotic characters with the city forming a vital backdrop to them (two of his archetypal traits); despite being neither intellectually off-balancing nor bitingly humorous like his best works, I found this light-hearted and mildly critical film a reasonably enjoyable watch. The ensemble, madcap film comprises of four parallel storylines about oddball Roman and American characters, and thus a subtle and charming dissection of what the historic metropolis represents. A failed opera director (Woody Allen) unexpectedly unearths a marvelous bathroom-singer while visiting, with his psychiatrist wife (Judy Davis), his daughter and her newfound love; a young and idealistic architect (Jesse Eisenberg) finds himself falling for his girlfriend’s pretentious best friend (Ellen Page), while being watched by his cynical and jaded older self (Alec Baldwin); an Everyday Joe and simple family man (Roberto Benigni) finds his average life drastically altered when he becomes a sudden celebrity; and, a naïve country-boy finds himself in a mess when he is forced to pass a drop-dead voluptuous hooker (Panelope Cruz) as his wife to his wealthy family, while his lovely wife enjoys a serendipitous tryst with a famous actor. Despite being quite uneven on the whole, the film did have its moments. The one featuring the old and young architect was brilliant at times, while Woody, in front of the camera after a long time, sure saved the best lines for himself.

Shubhajit, I must say I rather liked this one more than most, and have always thought the Woodman is best served by appearing in front of the camera. As always you do a marvelous job of framing the attributes engagingly and with observational skill. My own favorites are the opera singer being carted to the stage as he's showering, and the portrait of Benigni, which makes some astute satirical points on celebrity status.

I'll admit I was a bit disappointed by this film after loving 'Midnight in Paris' and his previous couple of releases - but it certainly has its moments. I agree with you that the story of the older and younger architect was sometimes brilliant (Alec Baldwin is also in Woody Allen's next film, so look forward to seeing him again!) and you are also spot on that Woody kept the best lines for himself. Great to see him back in front of the camera, even in a patchy offering. Great review, Shubhajit.

I do remember having read your generally positive response to the film in one of your Monday Morning Diaries. Woody might not be a great actor from the conventional sense, but he has an unique & inimitable style which makes it really fun watching him in front of the camera. And yes, the social commentary in the Benigni segment was quite sharp, as was the one where the wife gets swept over her feet upon meeting the ageing & balding actor. Thanks Sam for your response.

I too liked Midnight in Paris more, even though I found it to be nowhere near his best works - it was an intelligent but light-hearted comedy seeped in nostalgia. But yes, unlike most of his recent works (including Vicky Christina Barcelona), Paris was at least not at all uneven in nature. As for this film, great to know you too liked the segment on the architects. And yes, I'm aware that Alec Baldwin is part of Woody's next, and shall be looking out for that. Thanks Judy for sharing your views.

"To Rome With Love [2012]" is an excellent movie I have ever seen.
Concert Tickets