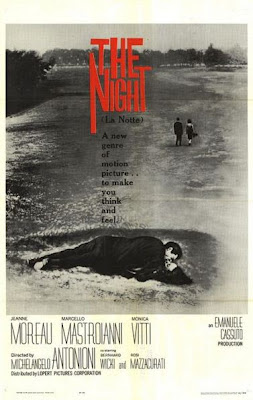 La Notte, the fabulous middle chapter of Antonioni’s renowned “Barrenness and Alienation” trilogy (which also comprised of L’Avventura and L’Eclisse), remains, in my opinion, the best film of the lot. It was, at once, a terrific study of ennui, malaise and emotional alienation among the rich, and an incisive portrayal of the cropping dysfunction in a relationship leading to the gradual disintegration of a marriage. Giovanni (Marcello Mastroianni), a famous and successful writer, and his beautiful but profoundly bored wife Lidia (Jeanne Moreau) – arguably the principal protagonist, are a seemingly happy but essentially distant couple. Set over the course of less than 24 hours in the city of Milan, the central focus of the film is a lavish party thrown by a wealthy businessman to celebrate the publication of Giovanni’s latest book. However, the ground work for that is created through the couple’s visiting a dying friend at the hospital, followed by Lidia’s taking a surprise leave by choosing to spend the day walking through the barren streets alone, thus echoing her interior state. These two events sharply bring to our focus the chasm that has formed between them, which the ensuing party only makes it starker. During the party, which is filled with a host of vacuous socialites content in having mindless mirth and merry-making, Giovanni meets the young, enigmatic and ravishing Valentina (Monica Vitti), thus kick-starting a short but fascinating manage-a-trois between them. Luscious B/W photography, a brilliant and incessant jazz-based score (a rarity given Antonioni’s love for minimalism), and fine performances accompany this spellbinding, leisurely paced, bleakly poetic and quietly meditative masterwork to an ambiguous but exquisitely chiseled finale.

The final scene is one of my favorite endings! The pool scene is another moment I remember. I think I read it was among Kubrick's best-loved films.

Yeah, the ending was indeed exquisitely done - esp. the letter that she quotes to him. I guess you either meant it was among Antonioni's best loved films or among Kubrick's favouorite films - not aware of the latter though if that's what you've meant.

According to wikipedia: The critically acclaimed film director Stanley Kubrick listed La Notte as one of his top 10 favorite films

Thanks Chris for that info. I hadn't gone through its Wikipedia entry in full. To be listed among Kubrick's 10 favourite films is indeed a great pat on the back for this masterpiece.