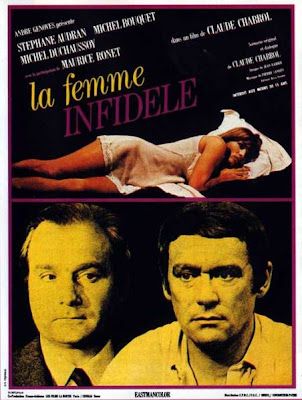 Claude Chabrol, one of the founding fathers of the Nouvelle Vague, made The Unfaithful Wife at the midst of what possibly was the greatest creative phase of his career. The film, which ranks alongside the likes of Le Boucher and Violette Noziere, as his most renowned work, was, on the surface, a crime thriller. But, in essence, this psychological neo-noir was a fascinating study on bourgeoisie values, marriage, infidelity, and the morality associated with committing murder. Charles (Michel Bouquet), a plum, ageing, wealthy insurance broker, and Helena (Stephane Audran), his young and beautiful wife, on first glance, seem a happily married couple, despite their stark physical differences. But, before long, the director makes it obvious that all is not hunky-dory – she is having a surreptitious affair with Victor (Maurice Ronet), which her husband is already suspicious of, and soon enough confirms with the aid of a private eye. Things, however, take a dark and violent turn when he, unable to resist his curiosity, pays his wife’s lover a visit, and ends up murdering him on passionate impulse. Bouquet gave a quietly powerful and layered performance as the mild-mannered, loving husband who loses his sense of placidity when confronted that his wife is sleeping with another man; Chabrol’s muse Audran, too, was effective as the adulterous wife, though one could have done with a more simmering display of sensuality. Though the film wasn’t short of gripping suspense, very well aided by the great sense of moodiness and a discordant score, Chabrol’s basic intent, of course, lied elsewhere, and he bridged this dived brilliantly and with great subtlety, leading us a highly satisfying final.

"But, in essence, this psychological neo-noir was a fascinating study on bourgeoisie values, marriage, infidelity, and the morality associated with committing murder."

One of your really great pieces Shubhajit, and on a film that has well-earned waxing lyrical. I agree that it's among Chabrol's greatest three or four films, and it easily trumps the later American re-make UNFAITHFUL which featured a well-received lead performance by Diane Lane.

Interestingly, I'd watched the American remake long back, and only much later did I become aware of the fact that it was a remake. The original by Chabrol was certainly the superior of the two, and that too by some distance.

Thanks a lot Sam for the appreciation. By the way, I'd be really interested to know which of his films you consider among Chabrol's best works.