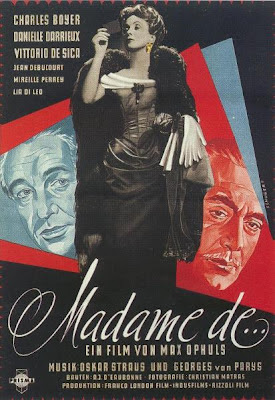 Made in France during the final phase of his long career by the globe-trotting German filmmaker Max Ophüls, Madame de… remains, along with the likes of La Ronde and Le Plaisir, as his most widely reckoned work. Based on a novella, Ophuls made interesting use of an inanimate object, viz. a diamond studded earring, to kick-start the story, drive the narrative forward, and bring the proceedings to its conclusion, in this elegant and sadly beautiful film reminiscent of grand and melodramatic classic-era Hollywood. The eponymous Madame De… (Danielle Darrieux), the beautiful and melancholic wife of a wealthy General (Charles Boyer), surreptitiously sells the earrings to a jeweler as she is in debt, and claims to her husband that she lost them. The earrings eventually make their way back to her husband, and then, via his mistress, reach the hands of an Italian diplomat (Italian neorealism exponent Vittorio De Sica) stationed in France. And thus begins a tale of ménage à trois that can only end in tragedy for all the three parties, as the hapless earrings keep changing hands as if locked in a cosmic merry-go-round. As can be expected, coincidence plays a key role in the film, as does dollops of overflowing emotions and sentimentality bordering on the saccharine. But, that said, the nice pacing, fine performances, interjections of humour and wit, fluent storytelling, excellent dynamics and simmering undercurrents between the two male leads that gradually reach boiling point, depictions of gentility and serial affairs among the wealthy, and the soothing cinematography and score, made this an engaging and a reasonably memorable work, if not the masterpiece it is generally made out to be.

One of the most exquisit films ever made, and a jewel of the Golden Age of French cinema. Often compared to WINCHESTER 73 in dramatic arc, Boyer, Darrieux and De Sica are wonderful, and you note the film is driven by expert storytelling, deft pacing and great dynamics. Terrific review of a film masterwork.

Thanks a lot Sam. Yeah, this film might very well have provided the template for an animate object acting as the driving force for the storyline, though I'm not sure of that. Winchester '73 used the same template, as did a few later films like Red Violin, and recent Bengali film called Laptop.