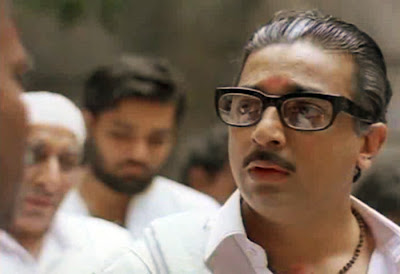 Mani Ratnam has often been referred to as a ‘popcorn auteur’, and Nayakan, regarded by most as his best work, provides a great elucidation of that. He infused elements of both arthouse and mainstream in it, thus making it appear as a highbrow film from a popular standpoint. This is a tale of how Velu, a young Tamilian boy, goes on to become a powerful gangster and a ‘Robin Hood’ figure for poor slum-dwellers in the city of Bombay. Kamal Hasan provided a superb and layered performance as the mobster with a heart – especially in his seamless portrayal of Velu’s journey from an idealistic young man to an all-powerful patriarch via personal tragedies. But the movie doesn’t seem to have aged very well. Further, it provided enough moments of déjà vu for someone like me who has watched Coppola’s Godfather trilogy. Though based on the real-life story of Varadarajan Mudaliar, the number of sequences and themes ‘inspired’ from each of the three Godfather films made it seem like a compressed and Indianized version of the Corleone-saga. It suffers from a few more pitfalls as well – poorly developed characters apart from that of the protagonist, incoherence and abruptness in some of the plot developments (as in the police officer who’s chasing Velu with such fury as to make one wonder if there’s some bad blood between the two), convenient usage of deux ex machina to create emotional tension, a rather lackluster background music by the renowned Illayaraja, subpar production values (specifically, editing), etc. Thus, despite the copious concoction of melodrama, and standard mainstream tropes and clichés, with faux-realism, moments of grittiness and violence, and the epic nature of the storyline, made this a reasonably engaging film, and also provided an apt illustration as to why the director has earned the rather pejorative epithet mentioned earlier.

Your blog is excellent. To get more visitors to your site submit your post at Stumblednews.0fees.net.

GUess you are not obsessed with Mani's films when it comes Tamil movies. :)

Try your luck with Kamal's directorial debut, Hey Ram, easily one of the best originally made Indian scripts.

ANd there are few more tamil directors who are under the must watch category, FYI.

Well, the movies of Mani Ratnam that I've seen so far didn't manage to impress me beyond a certain extent. Though I've found some of his films reasonably good, but not really much more than that because of his knack for inserting mainstream content perhaps to make the movies more sellable.

I've seen Hey Ram and I'd quite liked it. Do let me know of really good Tamil filmmakers whose movies I ought to watch.

You call Ilayaraja's music in Nayagan "Lackluster"?Do you even know what that word means?Atrocious Review!

There's a world of difference between admiring a person, and blind fanaticism.

To draw an analogy, Sachin Tendulkar doesn't score centuries or win matches for India every time he takes the field. I hope you're intelligent enough to get the point :)

I have neither admired Ilayaraja nor expressed any blind fanaticism towards him in my comment.Frankly speaking,I don't care two hoots about him.I simply implied that Ilayaraja's music in Nayagan has Universal acclamation and calling it 'lackluster' is atrocious.If you think you are 'Albert Einstein' and the one having views opposite to you are 'Taliban',and dare to give such condescending analogies & remarks,I have just got one thing to say:If you are living in a fool's paradise,enjoy it while it lasts :)

I'm not obliged to praise someone just because others have done the same. Acclamation (universal or otherwise), at most, interests me to give him/her a try - that, and no further. Thereafter, I make my independent assessment. I'm not sure if I can be any clearer than this.

Agreed that you are not obliged to praise someone just because others do. But, to criticize a universally acclaimed work either needs you to be a connoisseur of music, which I doubt you are or needs you to provide a solid justification for calling it so rather than throwing the kitchen sink in the name of review with words like lackluster.

Going by your logic,I'm not obliged to praise or accept your review.I'm entitled to my independent assessment and thereafter criticize it ,call it 'atrocious'.Why does it provoke you then?

@Mozart - Exactly my point.
@Shubhajit - You criticize Ilayaraja, AR Rahman,Franz Schubert, Johann Sebastian Bach, Hans zimmer whomsoever you want to. But show me your music credentials or at the least provide solid technical justifications, otherwise, I take it that you are simply assuming all the readers of this blog to be obedient imbeciles. To make it clearer, To call Sachin “An ordinary cricketer” , you better be a Don Bradman to simply say that and just walk away, if you are going to be just an ordinary commentator, you better start armoring yourself with solid points , as you’ll have to stand your ground literally and figuratively.

Its quite obvious that your intent here is to troll (the fact that you're posting under 2 fake ID's is proof enough). Nonetheless, here's my final response on this topic.

First, my mode of review (i.e. the 'capsule' form) doesn't allow me to delve too deeply on any single facet. Second, my music credentials are there alright (diplomas, etc.), but that isn't relevant here. Third, I don't believe that only a Don Bradman has the right to speak on a Tendulkar - anyone with reasonable knowledge & awareness about the subject are free to give their opinions (like it or hate it). Fourth, my criticism was about the score, and not about Ilyaraja's musical abilities (there's a world of difference between the two). Fifth, as for the score, it was bland, accentuated the melodramatic aspects of the storyline to the movie's detriment, and was too intrusive for me as a viewer, which all combined to make it a lackluster effort for me (since this isn't a music blog, the purpose here isn't to critique a composition, but evaluate it in the context of the film). And sixth, I consider it a travesty to name AR Rahman and the likes of Schubert & Bach in the same breath.

Just a couple of things more. One, my initial comment on adulation & blind fanaticism stands. Two, I hope someday you get a mind of your own - in this context, do some preread on 'freethought'.

Beethoven said...
Your world is so full of empty rooms .I posted with the ID Beethoven, in the context of this argument, hoping you would see the humorous side of it. Someone sensible probably did see it and came to the argument with the ID Mozart. Well, if you had bothered to check the IP addresses of the comments under two different names, you could have spared yourself an embarrassment of such a silly deduction. Now that I’ve logged in with the Gmail id, hoping you would stop chanting troll. Anyways how does the ID matter? What matters to a genuine guy is the argument!
First, I don’t care what your mode of review is. If I find something outrageous, I will point it out. Tomorrow when someone reviews Pather Panchali /Apu trilogy, if they mention on the fly, “A rather lackluster direction by Satyajit Ray” and leave it at that, will you not demand an explanation? If you are labeled as a man of “blind fanaticism” for that, will that not be sophisticated bullying? Second, diploma in some distance education program doesn’t qualify as a music credential. Third, Billions of bilious blue blistering barnacles, I haven’t said Don Bradman should only speak on a Tendulkar. Read that again. Fourth, I never defended Ilayaraja. As I mentioned already I don’t care two hoots about him. My defense is for the Nayakan score. Fifth, Nayakan score made thousands of people cry in cinema theaters even now when they watch @ home. Music or any art for that matter isn’t just for intellectual stimulation. It also matters how much it emotionally affects people. Sixth, I randomly picked up great music directors contemporary and otherwise to drive home some point. Sad you ate the wrapper and threw the chocolate away.
You don’t have the courtesy to take an argument to a logical end. You threaten me that you will delete all my comments henceforth. Such untamed fascism and you talk about “freethoughts” .If being humorous and sensible means trolling to you, well, it only means, the increasing megalomania of you is reaching gargantuan proportions to eat into your humility. Goodluck!