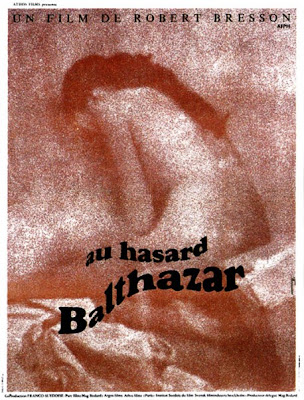 Human behaviour is not always rational; compassion is a rarity while acts of cruelty and the ensuing injustice and suffering are more dominant in human society – this was the predominant theme in Robert Bresson’s much acclaimed and deeply humanistic drama Au Hasard Balthazar. This deceptively simple and seemingly allegorical Christian tale had a donkey as both an important character as also a symbol of its themes. Christened Balthazar by a young girl who becomes attached to it, the movie follows the proceedings in a village from the point of view of the animal over the course of its long life, which sees everything and experiences both love and maltreatment by those around it with quiet acceptance and resignation. The characters surrounding it – be it the frivolous and rebellious young lady Marie or the delinquent and troublemaking young man she is attracted to. Balthazar’s ownership gets transferred to a number of people over the course of its life, and each new ownership ends up providing layered commentary and observations on human life and behaviour. The scene where the donkey quietly dies remains a powerful cinematic moment indeed. Minimalist in tone and execution, the film tells its various stories largely through images and long moments of silence, with sparse usage of music or any dramatic effects. Acting too forms a largely trivial aspect of the movie, and consequently it would be meaningless to search for any powerhouse performances in it. Though the outer calm that permeates it has been subtly juxtaposed with inner spiritual turbulence and discordance, its seemingly tranquil nature and detachedness can also be a tad misleading and even simplistic to those unwilling to dig deep.

I appreciate Bresson's work with every viewing of each of his films. Balthazar may be his greatest in a long list of brilliant films. His films of course are never about the performances, but about the purity and essence of intentions and the transcendance of the journey. This may be one of the 50 best films ever made in my opinion.

Thanks Jon for sharing your deep appreciation for Bresson's works. He was most certainly one of the great masters of world cinema, despite having made only 13 feature films in his career. In fact, from the point of view, one could draw an analogy between his career and those of other great masters like, Ritwik Ghatak & Stanley Kubrick, Orson Welles, etc. I still have most of Bresson's works left to explore.