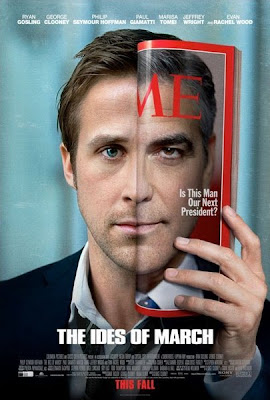 George Clooney’s latest offering as a director is a taut political thriller and a deeply cynical look at what goes on behind the scenes during US Presidential campaigning. The Ides of March, adapted from a popular play, takes place during the Democratic nomination process where Governor Mike Morris (Clooney) is in a neck-to-neck fight with his opponent. He’s seen as a clean person with impeccable integrity, but even he has a skeleton in his closet – in the form of a pretty young intern (Evan Rachel Wood). The theme propounded by this underhanded morality tale has been brought forth through the character of Stephen Myers (Ryan Gosling), an exceptionally talented press secretary, who learns some brutal truths about politics the hard way. This is a solid film that keeps one thoroughly captivated over its length, thanks to the breathtaking pace at which the story moves forward, the relentlessly moodiness, and the fine performances by its talented ensemble cast. Gosling and Clooney were good in their well-crafted characters, as were such powerhouse performers as Phillip Seymour Hoffman and Paul Giamatti as the campaign managers for Morris and his opponent, respectively; even Marisa Tomei shone as an opportunistic reporter. The movie is not without its flaws though. The journey of Myers from idealism to lost innocence, for instance, took place too quickly, thus making the impact of the transformation lesser than what could have been achieved had some more time and effort been devoted to it through the script. Also, some of the moments could have been handled with softer hands. But those apart, this is yet another competent and admirable directorial venture by Clooney.

I agree, was solid entertainment, I couldn't help comparing to Bill Clinton and the Lewinsky affair, no idea if it was based on that.
The Clooney character was likeable, so I had mixed feelings about him. It was tough to know who to root for, if anyone, particularly when Gosling attempts to switch sides. Ambiguous characters always makes a story more interesting.

Indeed, ambiguous characters do make stories more interesting, and realistic too. Clooney's played his role with impeccable charm, thus making his tryst with the intern look more like a stray incident. Even Paul Giamatti's character was interesting - the short speech he gives Gosling made his character seem a disturbingly real person of flesh and blood, despite the small screentime he has in the movie.

The Lewinsky affair might have played in Clooney's mind when he made the movie :)