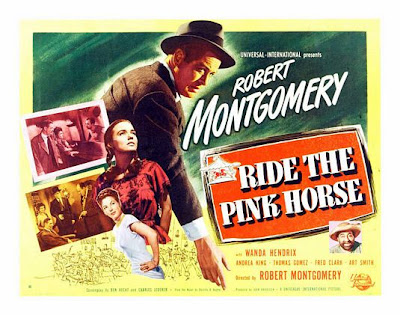 Set completely in the locale of an impoverished New Mexican town during the occasion of an exotic annual fiesta, the memorably titled Ride the Pink Horse is an interesting noir, though not as widely known as many of its contemporaries. At its essence, this is a hardboiled story about revenge and personal vindication, where the line between good and bad often gets blurred to the point of invisibility. Robert Montgomery, who also directed the film, starred as Gagin, a laconic and bitter ex-GI, who, in order to get even with the vicious, hard-of-hearing mobster who killed his pal, starts blackmailing him; but things, as expected, do not turn out as he’d planned. On the way to his self-destructive path, the loner Gagin befriends a naïve but pretty and petite Mexican girl, a rotund and gregarious merry-go-round operator, and a world-weary FBI guy who too wants to get the guy, albeit through legal means. Though the film starts exceedingly well, it is somewhat undone by its tad soppy and uneventful climax. However, where it lacked in a powerful plot, this mood-piece more than made that up through distinctive style, evocative atmosphere and moral ambiguity. The film was also helped by good acting and fine photography.

"At its essence, this is a hardboiled story about revenge and personal vindication, where the line between good and bad often gets blurred to the point of invisibility..."

Indeed Shubhajit. As you subsequently note, it's a mood piece that follows a formula that isn't exactly original, but also difficult to negotiate. Montgomery is excellent and the film has gained in status through the years. Again you've brought the most vital issues to teh table here.

Thanks Sam. Yeah, despite the simple & been-there-seen-that storyline, a lot goes underneath what's seen on screen. The film also suffers, where popular perception goes, from its anti-explosive ending. Great to know that it has gained in status over the years.