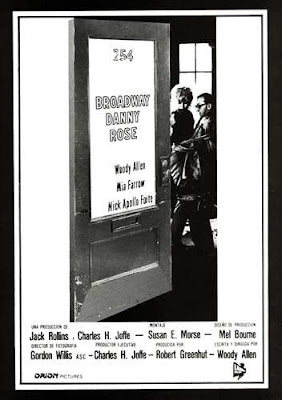 Critics often tend to brush off Woody Allen’s lighter comedies. Broadway Danny Rose might not be as profound or audacious as the films recognized as his masterpieces, but it still scored a lot of brownie points for me thanks to the simple reason that it is a lovable and delightful urban comedy. And, for all its humour and funny gags, it also comprised of a fine, albeit subtle, dose of pathos and, well, what surely counts as Woody’s favourite theme, a nostalgic look at New York. The film, shot in glorious black-and-whites, opens with a group of men discussing the life of a quirky agent who has just demised. And while discussing about this likeable man called Danny Rose (played wonderfully by Woody himself), who has the habit of signing up losers and has-beens and treating them as his family, the film concentrates on a particular strand of his unassuming life. He has under his wing an alcoholic crooner named Lou Canova and is desperate to do anything to bring Lou’s career back on track. While trying to do so, Danny ends up facing a whole lot of problems, ranging from trying to woo Lou’s neurotic mistress (played with élan by Mia Farrow) to attend his big concert, to finding himself to be the target of a couple of gangsters out for his life. The film is a charming, bittersweet, humorous, melancholic, witty and intelligent work that no Woody Allen aficionado should give a skip.

It's nice to see an appreciation of this, always one of my favorite Woody Allen films. You're right, it's a light comedy at heart and because of that it desn't get the universal praise of some of Woody's more serious films from around the same time, but it's still great. The helium chase sequence always gets to me, as far as laughs go, and the Thanksgiving scene at the end is surprisingly touching.

Thanks a lot Ed for sharing your enthusiasm for the film. Yeah, as you said, parts of the film are really touching - the scenes you've mentioned are worth remembering. And as all good Woody Allen films, this too has been very well written, and I quite loved the wit, humour-quotient and the observations. And by the way, its really nice to hear from you after a long time.

"The film is a charming, bittersweet, humorous, melancholic, witty and intelligent work that no Woody Allen aficionado should give a skip."

Yes it most certainly is Shubhajit, and as far as I'm concerned it's one of the Woodman's most irrestistibly endearing films. The Allen/Farrow scenes are very funny, and the writing is subtle, with a satiric underpinning. As well as any film, Allen uses New York locations to authentic and compelling effect.

"Endearing" is indeed the most apt word to describe this film in one word, and, as you said, irresistibly so. And, as in nearly all of his best films, the city of New York - with its character and its floavour, played a wonderful role in furthering the subtle melancholia of the otherwise funny occurrences in the film. Thanks Sam for pitching in.

All good Woody Allen films, this too has been very well written, and I quite loved the wit, humour-quotient and the observations. And by the way, its really nice to hear from you after a long time