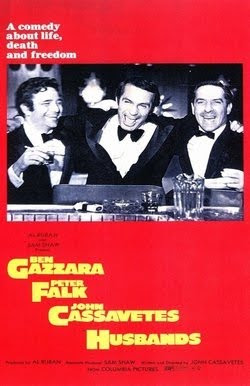 Husbands might not make the list of John Cassavetes’ best works, yet it does merit a watch for the presence of elements that made Cassavetes a darling of the indie circuit. The film is a distressing, scorching and daring look into mid-life crisis. Harry (Ben Gazzara), Archie (Peter Falk) and Gus (John Cassavetes) – New Yorkers, best friends, and all in their mid-30s – are seemingly living the American Dream, even though their lives are essentially hollow within. When one of their common friends suddenly dies, they suddenly find their definitions of life falling apart, and out of a sense of severe guilt and helplessness, they spend the next few days after the funeral doing everything they wouldn’t normally do – roaming the streets, getting drunk, hopping a flight to London, gambling, spending night with hookers, in an attempt to regain freedom. Archie and Gus, however, eventually decide to get back to their mundane lives, leaving Harry behind. The film is flawed, no doubts about that – most of the scenes suffer from being overlong, making it a difficult watch for most viewers. The film lacks a sense of direction too, but that might very well be a reflection of the lives of the three protagonists. What makes the film really notable, though, are the captivating, improvised and unbelievably natural performances of the three lead actors. For all its flaws, it still remains an important film in 1970s American Independent cinema.

"The film is flawed, no doubts about that – most of the scenes suffer from being overlong, making it a difficult watch for most viewers. The film lacks a sense of direction too, but that might very well be a reflection of the lives of the three protagonists."

Yep, Shubhajit, despite what you subsequently say here, this is one Cassevettes that I always found some problems with. The director was a rightly estemmed auteur, but this one never seems to come together, and leave one with the resonance that a number of others did. I'd say you basically corraled it with the clip above. But you done a great job providing the pros and cons here as always!

Thanks a lot Sam. Yeah, I'm not surprised to learn about your views about this film, as I've learned about a lot of negative reaction regarding it among critics. But, as you noticed, my reactions on the other hand is a tad ambiguous, but leaning more towards the positive direction. And this film has made me really keen to try Cassavetes' more acclaimed films.

I think one of Cassevettes' best is A Woman Under the Influence (1974), another very underrated Cassevettes, is Minnie and Moskowitz (1971)

Yeah, A Woman Under Influence does top everyone's list as far as bast of Cassavetes goes. I've the film lying with me for some time, but unfortunately haven't gotten around to watching it.

Mike Leigh's film you say? Sounds interesting. I'll try and lay my hands on it as soon as I can.