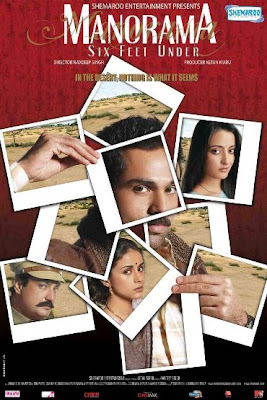 Manorama Six Feet Under is an interesting, and at times, a mind-bending thriller – I’m sure that’s reason enough to call it an offbeat Hindi films. The film is an Indian rendition of Roman Polanski’s Chinatown. The protagonist is a small-time writer who, while investigating a powerful politician for infidelity, gets inadvertently drawn into a sordid conspiracy filled with blackmail, deceit, murder, and well, much more. Set in the rural badlands of Rajasthan (expertly framed by the DOP), the film is well-paced and boasts of a captivating plot, more so if you haven’t already watched the Polanski masterpiece. And the iconic role of Jack Gittes (immortalized by Jack Nicholson) is here played by Abhay Deol. Though never close to Nicholson’s volcanic performance, Deol's is pretty good nonetheless. Raima Sen too is good as a mysterious girl who Deol, despite being a married man, finds himself falling for, while Kulbushan Kharbanda and Vinay Pathak are very effective in their respective roles. A lot about the plot might seem borrowed from the neo-noir classic it is based on, yet there’s also a lot of novelty here which seems like a whiff of fresh air amidst the travesty regularly dished out by Bollywood in the name of cinema. And, given that the director came clean about his reference by showing a glimpse of the famous nose-slashing scene in Chinatown, it’s easy to appreciate the fact that he isn’t just a good filmmaker, but an ardent cinephile too.

I loved this film when I watched it a few years back. I found it to be delicious. I love noir like you do and this had all the elements of it. The ending was so delightful.

I hadn't watched Chinatown till about a year ago. In fact, I didn't even notice or think of the two films being similar till I read it here. That's a tribute to the film I guess as it is a fine piece of work.

I would love to see this film again some time as I am sure I would notice and appreciate it much more.

Yeah, this is a nice film. Well, there are quite a few similarities with its source of inspiration - including the whole murky scandal having its source of origin as a project to bring water, as well as how the protagonist gets lured into it thanks to a lady masquerading as the "wife" who wants to pry on her husband.

Yes, there are many points of separation as well, but on the whole I felt the director stuck pretty closely to the Polanski film. And, got to agree with you, irrespective of its inspiration, this is a pretty good film on its own too.