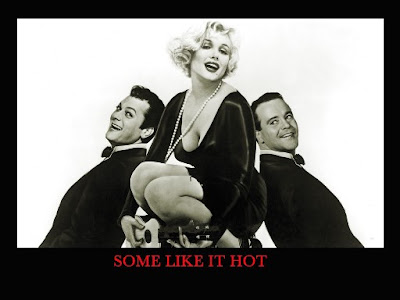 Billy Wilder’s Some Like It Hot was such a brilliant comedy that it continues to provide undiluted, wholesome fun even to this date. But what made it even more interesting is that, it was such a diametrically opposite work vis-à-vis such disturbing and acerbic portraits of human society as in his iconic films noirs like Sunset Blvd., Ace in the Hole and Double Indemnity! Jack Lemmon and Tony Curtis starred in the film as two down-and-out musician buddies who, while on the run from a dreaded Chicago mobster during the Prohibition-era, cross-dress as females and seek refuge in an all-girl music band at Florida. The band’s lead-singer happens to be Marleyn Monroe, who, with her innocent face and devil’s body captures their imaginations, and Curtis starts seducing her by impersonating as the owner of the Shell Company. Meanwhile, a wealthy old ‘mama’s boy’ grows fond of Lemmon and starts wooing him (her) with hilarious vigour. The chemistry between Lemmon and Curtis were tremendous, as were their individual performances. And Monroe, as the dumb but voluptuous girl, brought to life perhaps the most iconic role of her career. The movie’s fun, frolic and romping charm, through one hilarious set-piece after another, would have even the most serious person peeling with laughter; and thus, it remains one of the most evergreen classics of American cinema.

Totally agree. It is such a timeless film. The comedy still works today just as well as it did when it was released. And it still has one of the best comedy endings in the history of film - I don't think anyone can beat that.

This one never resonated with me despite several viewings and an acute cognizance of it's celebrated reputation. And it's director is one of my very favorites of all-time. The humor for me was pedestrian, despite the most intriguing narrative arc. Still, th performances were accomplished and nearly everyone praises the script. You've written yet another economical piece of insight and appreciation.

One of the most enjoyable and fun movies I've seen. Curtis's and Lemmon's chemistry is great indeed, and I'll have to agree with Dan on that ending - a true classic.

Great that you're with me on this. And yeah, the final line, "Well, nobody's perfect", was awesome!!!

Thanks Sam. Well, it was interesting to read your counter view on the film. I loved the humour though - yes, it was illogical, but it was also great fun. And Wilder happens to be one of my favourites too, so it was really amazing to see a movie that's the polar opposite of his bleak & bitingly cynical noirs.

Absolutely... I've rarely had such wholesome fun as I had while watching this film. As you said - a true classic.

One of my all time favorite films. A brilliantly written script and a breakout performance by Jack Lemmon. Curtis is the one who usually gets the short end of the fuzzy lollipop overshadowed by Monroe and Lemmon but he is so good in that role and his Cary Grant impersonation is spot on.

Thanks a lot John for the appreciation. I agree, though Curtis and Monroe got the maximum publicity out of the film, Lemmon was equally good if not better.

Incredible. I have seen this movie so many times. I really enjoyed it. The characters are are chosen so nicely that makes the movie more interesting to watch. The story line is awesome.Watch Movies

Yeah, absolutely!!! The film is filled with one hilarious gag after another, and culminates into one of the most memorable climaxes. Thanks for visiting.

My favorite comedy! I visited the Hotel del Coronado a few years ago and ate dinner on the deck, my mind lost in the black and white images of celluloid time, and couldn't help but imagine Tony Curtis swaggering through the crowd with Marylin.

BTW: Richard Matheson based his novel BID TIME RETURN at the same hotel, but it was filmed as SOMEWHERE IN TIME at another location.

Did I mention this is my favorite comedy? It plays a bit prosaic to modern audiences because every joke has been lifted and used in contemporary context. Not that Wilder's script is entirely original, but just so well executed.

Undoubtedly one of the best comedies ever made, if not the best ever. A charming movie filled with hilarious gags and timeless rejoinders. And the chemistry between the actors made it extra special. The guy who falls in love with the female incarnation of Jack Lemmon was superb, though he never gets a mention given the stellar cast of Curtis-Monroe-Lemmon. You're right, even though a lot of the jokes have been used & reused, the movie still felt so delightful and fresh. Thanks for sharing your enthusiasm for this film.

Yes indeed it is so. This has the distinction of being a timeless, for the ages comedy. If you play this in the cinemas now, we'd be the first ones to buy tickets. Sadly, the state of comedy nowadays is sometimes quite inane. 'The Hangover' is raved about from many although it wasn't all that funny.

Magnificent review by the way. You captured the movie perfectly. :)

Hello I'm merely coming by to say hello and also to congratulate you for writing an excellent review. I too have watched this movie a lot and it one of thosef films that seem to come to the rescue when nothing else does.
download movies