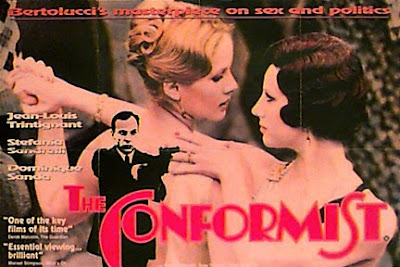 Bernardo Bertolucci stretched the limits of social and moral conventions, and literally played with fire, in movies like The Last Tango in Paris and The Dreamers. On the contrary, in The Conformist, the movie that won him international acclaim and that probably remains his most famous movie till date, his provocateur nature was far more subtle – the provocations were more through the story’s ideation and the characters’ gestures, than through explicit images. Marcello, who willingly conforms to the implicit demands of the society around him, agrees to the orders of the Nazi high command in Italy to undertake a mission in Paris to assassinate his former mentor who is now a political dissident. The relationships that he shares with, and the tantalizing tango that he participates in with his mentor, his mentor’s beautiful wife, his blind friend (cum sympathizer of fascism), and his young and naïve wife, do not just make for complex character study, but also in many ways a powerful commentary on the rise of the horrific movement in Italy and other European countries post World War I. The film boasts of staggering cinematography what with its exquisite camera work, expressionistic photography, rich colour compositions and a heavy usage of stylizations. That, along with the lilting background score reinforces the inherent sense of melancholy and ambiguity that pervades every frame of the movie.

Aye, Shubhajit, it's absolutely Bertolucci's masterpiece, though the general public will always favor THE LAST EMPEROR. Ice eroticism and surrealism abound in this spectacular showcase of creative cinematography, and it's clear enough that the director is commenting here on the Fascist mentality, and Trintignant's character obviously is harboring some inner demons. It's certainly one of the most brilliantly constructed of all Italian films, and you have rightly issued your typically fecund analysis in its defense.

Thanks a lot Sam for the appreciation as well as the terrific summation of this Bertolucci masterpiece. Indeed, before anything else, what strikes the senses is the cinematography - which, I feel, might have been a forerunner to Wong Kar-Wai's use of equally expressionistic cinematography to bring forth the mood and tone of the film. And the film surely is a complex, if controversial, discourse on fascism.

Conformist is one of the greatest feats of cinematography ever, and the film itself has left me eager to read Moravia's novel. In a way it's a dry run for Bertolucci's 1900, and I'd be interested in your opinion of that mammoth movie, if you've seen it.

Well, I have a copy of Bertolucci's 1900, but I haven't watched it yet. And since I'm pursuing higher studies right now, I don't know if I'll manage to watch it anytime soon. But yes, it certainly is in my must-watch list.

Not only is it his masterpiece but a key influence on the austere visual look of The Godfather. Today though when most are reminded of BB it is Brando in Last Tango which tends to rise to the top of the list. The Conformist was a real achievement in terms of cinematography particularly Storaro's use of filters - interestingly he would go on to collaborate with Coppola on a number of key films. Also it benefits from a haunting score by Delerue and Scarfiotti's magnificent production design.

Indeed, Last Tango in Paris tends to be remembered for all the wrong reasons. Great that you mentioned Godfather. The final scene of The Conformist (the standoff of sorts between Marcello & his wife) reminded me a lot about the final of Godfather (a similar standoff of sorts between Michael & his wife). And yeah, the haunting score does play a large role in creating the mood.

Shubhajit, another great review for a masterpiece: you're able to discern the key elements that make up Bertolucci's alchemical formula. This is in my top ten of all time but have yet to write a review. You have inspired me once again:)

Thanks a lot Alex for that. I'd be eager to read your take on the movie. I don't know if it would make my top 10, but yes it would be up there with my favourites.