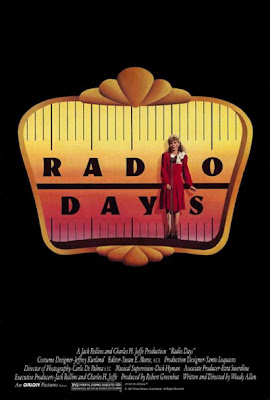 Radio Days is Woody Allen’s fond remembrance of the times when listening to the radio was not just part of pop-culture, but was also a national pastime for those who could afford it. Though a trip down memory lane, Allen ensured that the movie never veers into the territory of melodrama; instead, it is whimsical, littered with sharp humour and filled with the kind of warm-hearted nostalgia that is bittersweet but never sappy. The coming-of-age tale, narrated by Allen, is set during World War II, and has as its protagonist a neurotic boy, an obvious representation of the director himself, growing up in a neurotic middle-class Jewish family in Brooklyn, New York. On one hand the episodic film shows how his family, his friends and in turn he himself are all glued to their favourite radio shows, while on the other we get to experience behind-the-scenes peek into the dysfunctional lives of the radio-stars who were otherwise the pop icons of the radio era. The film has no direct plot per se, instead it cross-cuts between the two strikingly dissimilar diaspora – the average blue-collar Americans and the schlocky uptown stars; and the two are bridged by a young and ambitious cigarette girl (played hilariously by Mia Farrow), albeit with a horrible accent, who dreams of making it big in the then glamorous world of radio stardom. The film boasts of a fine soundtrack commensurate with its theme.

I always forget this is a Woody Allen film (I saw it when I was much younger and didn't know much about him). I remember being really charmed by the little period details and atmosphere. Great review!

Thanks Alex. Yes, this is quite an un-Woody Allen film, as you aptly observed. Not as cerebral as most his films are known to be. I too was quite charmed by the film's referencing of a time lost to space.

Yes, the neuroticism with always be there with Allan's work, but you nailed it there as a whimsical trip down memory lane, which has always been one of teh Woodman's specialties. This is one film that has gained in reputation since it's original release.

Thanks Sam. I agree, there's a pattern to Allen's writing. His humour, wit & cultural knowledge always tend to be a part of his writing. Yet, in some ways or other, he has broken the pattern here, and quite successfully too.

Hello from Greece.A nostalgic film for all the radio lovers!One of the best soundtracks i've ever heard.

Agree with both the points you've stated. Thanks for stopping by.

It was really a golden period for Allen during the middle 1980s with Broadway Danny Rose, Purple Rose, Hannah and her Sisters, Radio Days all coming between 1984 and 1987. The Purple Rose Of Cairo, I feel, is one of his most underrated and remains one of my favourite films by him. I think the whimsy in Radio Days is also evident is Cairo - perhaps he was going through a particularly melancholic period.

I agree, that truly was one of the beast periods in Woody Allen's life as a filmmaker. I'm yet to watch many of his films, but I'm already developing a deep liking for his films - especially his screen-writing. As yes, melancholy is oftentimes the genesis of great works of art.

This is one of my favorite Woody Allen movies and, sadly, one of his less remembered pictures. Yes, you rightly point out its comedy, but I think the most memorable scene for me is when the family huddles around the radio to listen to the breaking news about the girl stuck in the well. It is a wonderfully poignant moment that reminds us how radio brought the world closer to us, something we take for granted in this age of satellite television and the internet. Thanks again for reminding me how much I love this movie!

Thanks a lot Jason. Yeah, you've made a terrific point there. The movie does fall under the broad category of comedy. But, as you mentioned, the film has its share of poignancy that superbly complement the comic moments. The scene you specifically referred to touched me too. Its difficult to say whether the radio age was better vis-a-vis satellite TV or internet ages; but yes, that surely was a wonderful time that, alas, is lost forever.

Thanks JAFB for the response. I'm aware of the fact that this movie is quite close to you, so in a way I was waiting to hear from you :)