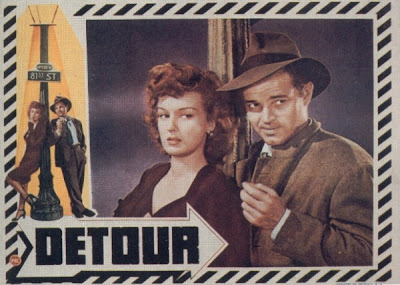 Edgar G. Ulmer’s B-Noir classic Detour had one of the most alluring and “noirish” premises of all noir films, and that’s saying a lot given the number of incredible masterpieces belonging to this distinctive school of 40’s and 50’s American filmmaking. Roberts, a washed out honky-tonk player, while hitchhiking his way from New York to Los Angeles to meet his girlfriend, is given a ride by a friendly gambler. However, when he suddenly drops dead for no reason, Roberts gets rid of the body and starts driving the car impersonating as the dead man. But luck runs only so far for him as he inadvertently offers ride to a mysterious wild-cat of a lady who suddenly blurts out, “What did you do with the body?”, and blackmails him into trying to rob the dead gambler’s rich, aged father. As any noir-lover worth his two cents would know, things can only go downhill thereon for our hapless protagonist. Shot in a mere 6 days, the movie’s collar-grabbing storyboard was unfortunately largely undone by the largely unimpressive performances of its two leads. The shabby production design too hurts the eyes, though they do add to the inherent sleaziness of the proceedings. What thus really gets the interest going is the sense of fatalism that pervades nearly every single frame right till the bleak climax – the film, like every noir worth watching, remains an apotheosis of Murky’s Law and the kind of irony it embodies.

Ulmer is an accomplished expressionist who did much with this B production, which is now rightly considered a classic of the genre, even with the issues you rightly broach here. The film contains some underling cyninism and a trademark femme fatale, and in many ways it's an archetypal noir. Of course the fatalism you mention here is the essence of this atmospheric gem that never ceases to enthrall with its relative minimalism. Your grasp is as always first-rate.

Thanks a lot Sam. I'm quite sure the movie's reckoning is far more today than it was during its time of release. Yes, it certainly remains an archetypal noir, but its worth is more from a historical standpoint than, I daresay, its artistic merit. But yes, its theme of fatalism and doom did captivate me, even if the acting left a lot to be desired.

Your rating is about right. The shabby production values and bad acting cannot elevate this film to the level of The Killers, Night And The City, and other more well done noir classics. While I sometimes scratch my head at the enormous reputation this movie has acquired I do find it sad that a worthwhile DVD copy does not exist on the market. It is a fun little genre picture that touches upon many film noir reference points. Not a bad way to spend an hour and change.....M.Roca

Absolutely. Its fun, dark, fatalistic and has a compelling plot. And the director took a great decision in keeping its length so crisp. Consequently, though the shabby production values & poor acting doesn't allow it to be elevated to the level of some of the great noirs you've mentioned, it's not an uninteresting watch either. Thanks Maurizo for stopping by.

Hi Shubhajit. A great book by the British Film Institute has been published on Detour, written by Noah Isenberg. Detour is one of my personal favourites when it comes to film noir. We have to approach this in the poverty row context for a full appreciation. Detour is equally a road movie which makes it somewhat problematic as a genre text. As for Ulmer, another overlooked film of his The Black Cat starring Lugosi and Karloff.

Wow, a full book dedicated just to the movie detour?!? That's really amazing! Yeah, I'm aware that this movie must be approached from the Poverty Row context. But then, it would be like saying mainstream films should be approached from a different context too. Personally I prefer to have a unified approach. But I also do appreciate the concerns you've raised. Thanks for that Omar.