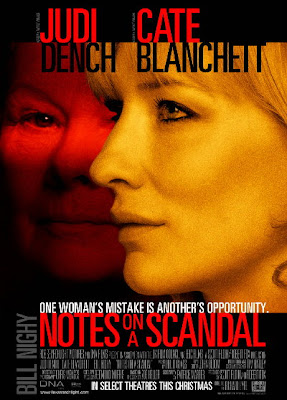 With Judi Dench and Cate Blanchett, two of the most acclaimed actresses of their times, taking centre-stage in Notes on a Scandal, you expect sparks to fly; and know what, they do at times since they both have such meaty roles that most actresses would give a limb or two for. Yet, for all the powerhouse acting it boasts of, the movie has been let down by the script that is nowhere commensurate with the dark and complex tale of lust, jealousy, betrayal and revenge. The movie is about Barbara, an elderly domineering history teacher, who gets emotionally obsessed with Sheba, the new art teacher in school. However, as their friendship starts developing, complications ensue when she learns of Sheba’s surreptitious and adulterous affair with a minor student who is as old as her daughter. Backed by the ominous voiceover of Judi Dench, the movie starts off well immediately catching hold of our attention. Though the film manages to remain reasonably compelling right till the end, that’s principally thanks to the two leads. The main flaw with the film lies in its inability to fully convince us why the two ladies are doing what they are doing, on account of the director’s failing in unraveling the working of their minds. Thus, at the end of the day, the film is a disturbing, if not a very profound, exploration of bitterness, insecurity and moral dilemma.

It appears I liked this film more than you did.

I heard the purpose was not to explain Sheba's motives, in order to create some character ambiguity. Actually, the American title of the novel is "What was she thinking?: Notes on a scandal.

I will be reviewing this film at some point on my blog.

Well, I too feel the director shouldn't explain everything. My point wasn't that. I felt the characters' actions seemed not chalked out well - the reasons for & motives behind their actions should have been part of the narrative arc.

Will look out for your review so that this debate can be continued :)

Well, I must say I have precisely the same issues you do with this film Shubhajit! The narrative is awash in contrivances, even with the undeniablt powerful performances by both Dench and Blanchett. The combination of what you rightly note as "meaty" roles and the high-caliber talent make for a can't miss chemistry, and the essence of the drama is uneven. Great to see you are getting some time to address your passion, and are seeing some films my friend! The typically fecund capsule on display here!

Thanks Sam. Exactly, the one word that would describe the movie for me is "uneven". The subject matter was so strong that it deserved to be converted into a far better film that what it finally turned out to be. A more confident & competent director should have chaired the project.

Nice review. I saw this film back when it first came out and I did enjoy it but kind of hoped more would happen. I felt like it was building up so much to a climax that didn't quite come.

It was also SO scary seeing Judi Dench in this kind of role when I was so used to seeing her in as Time Goes By as sweet old Jean.

Thanks Sadako for posting your views on the movie. Yeah, the buildup was great but the film didn't quite live up to that. And Judi Dench indeed was terrific in it.

Totally agree about the performances. Dench and Blanchett hold the whole thing together.

There there Dan, there there...