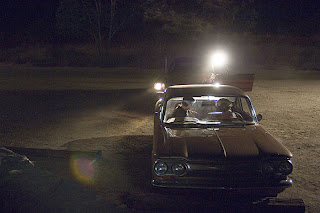 Zodiac, like his earlier Seven, happens to be a terrific achievement for David Fincher for the simple reason that, despite being in essence a serial killer movie, it has managed to be far more than the narrow conventions of the genre. Based on the unsolved case files of a cryptic real-life serial killer called Zodiac who left a trail of bodies in the 60’s and 70’s California, the movie follows the consequent effects on the lives of four individuals – a geeky cartoonist working for San Francisco Chronicles (Jake Gylengall), a cynical and alcoholic crime reporter (Robert Downey Jr.), a quietly competent police detective (Mark Ruffalo) and his soft-spoken partner (Anthony Edwards). Intensely moody and insanely gripping, it is an incredibly dark, meticulous and compelling examination of human obsession, and a chilling account of the publicity-crazy society we live in. Despite what the plot suggests, violence plays more of a thematic role than a physical one (most of the time existing just outside the camera’s vision); thus what has emerged is a riveting character study that is far more cerebral than the kind of visceral movies we’ve come to expect from Fincher. The movie has benefited immensely from the exceptional, tour de force performances by the lead actors, and the interactions they share onscreen. The soundtrack does very well in capturing the zeitgeist of the times, and the brilliant atmospheric visuals make for an exhilarating viewing experience.

p.s. This happens to be my 300th review here. Let me raise a small toast to that.

Congrats on the 300th review, Shubhajit! It's definitely an achievement worthy of praise. And I have certainly come to appreciate how difficult it can be to write capsule reviews that are both insightful and interesting and you do this quite well.

As for ZODIAC, I think it's an absolutely brilliant movie. I ranked it #5 in my best of the 2000s. Anytime someone can take a mystery, where the audience already knows the ending, and manage to keep it gripping and thrilling throughout then kudos are in order. This is Fincher at his best, in my opinion. A great, great movie.

I've never been a Fincher fan and on first viewing I was not impressed except for Mark Ruffalo...who looks like he was born for the 70s!

But it interested me enough to revisit when it was released on HD-DVD (the dead format) and I realized how masterful it was. It would have made my Top Ten list in 2007 if I had been in my right mind:)

It's strange how sometimes a film (or any work of art) can leave you cold but, if given a second chance, you see it in a whole different light.

Holy Cow! That was fast. I remember posting a comment on the 200th. I think it was Bad Education. Cheers once again for this wonderful venture of yours.

Watching Zodiac was like being part of the investigation. A very involving film indeed. Along the same lines you should check out Memories of Murder which is about the first known serial killer in South Korea.

@Dave: Thanks a lot Dave for the really kind words. Cinephiles & reviewers like you have set the bar so high that I too try and do my bit.

Yes, Zodiac really grips you from start to finish, despite it being such a detailed character study.

@Alex: Well, contrary to you, I have admired Fincer's movies, and have especially loved his Fight Club & Seven, as also liked his Game.

However, quite strangely, I too didn't really enjoy my first viewing of the movie, which was at a theatre some years back. The recent viewing thus has really changed my mind, in the same way a secong viewing changed you mind.

@JAFB: Thanks a lot buddy for being a regular visitor at this humble site of mine. Yeah, I too really hope this passion of mine has a long life.

@Kogi: Thanks man. Yeah, I've watched Memories of Murder, and found it a very impressive movie too.

JAFB, cheers to your memory!!!

Indeed, cheers to your 300th. That's a great milestone.

And this is a terrific reminder that i need to see this movie again (shockingly I only saw it once in the theater). Pretty powerful stuff.

Thanks a lot Daniel.

So you too are part of that club comprising of people who weren't impressed the first time ;)

I assure you, you'll be bowled over when you revisit the movie

Oh no, let me clarify - I was blown away on first viewing, it's shocking that haven't yet seen it again!

Daniel, my apologies for misinterpreting your comment. Because that happened for me, I guess I'm now trying to get others on board too on that :)

Congrats to you Shubhajit! Sorry I'm a little late to the party here. I do like this film quite a bit, but perhaps not quite as much as most here. I found ZODIAC extraoedinarily controlled and cerebral, certainly always challenging and a film that never exploits it's subject. Of course this is exactly where you are coming from in your excellent capsule when you say "it has managed to be far more than the conventions of the genre."

ZODIAC is a film that should have received more attention come awards time. Unfortunately, it was released early in the year and was nearly forgotten.A brilliant film that manages to keep the suspense despite knowing the ending. That in itself is a tall acheivement.

@Sam: Thanks Sam. It good actually that you didn't comment earlier, as I wouldn't have been able to reply then, cos I was on vacation - more on that at the comments' section of your Monday Morning Diary. Yeah, controlled & cerebral are apt epithets for the movie indeed.

@John: Thanks John. You've given a great reason why this movie is considered a brilliant piece of work. Doesn't matter if you know or do not know how the movie ends, it manages to be a terrific watch either way.

Congrats on your 300th post! And what a way to mark such an occasion with an entry on one of my favourite films of the noughties. Zodiac is a masterpiece. By far, Fincher's best film as it shows a maturity. However, the only flaw with the film for me remains with the compromised casting of Jake Gyllenhall as Graysmith. He just doesn't cut it for me. Apart from that, epic in scope and one of those rare American films that actually need to be just that little longer to savour even more. Here's to another 300 posts, Shubhajit.

Thanks a lot Omar. Well, I'm looking forward to that day when I'll (hopefully) have a 1000 movies reviewed here. That's a long way of course, but I strongly feel its achievable. And well, unlike you, I quite liked Jake Gyllenhall in the movie - I felt he fit in quite well in his 'boy scout' character.

Congrats for triple century... Here, I always wander and added you in my blog roll for getting information about best of world cinema. Crispy and compact reviews... Loving it. The first movie downloaded exclusively by your recommondation was --- 'Ace in the Hole'. From then onwards, always looking for next post.

Thanks a lot Yayaver. Its a pleasure that I've managed to get 1 or 2 good movies across to you. Do keep visiting & posting your views.

I personally enjoyed Zodiac and I personally feel it was definitely overlooked by the Academy during the award season in 2007. Fincher did an amazing job with the direction of this film.