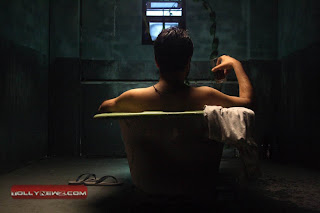 Clerk is a rapturous, mightily engaging film with distinctly arthouse sensibilities. Boldly experimental without ever being inaccessible, newbie director Subhadro Choudhury has shown the kind of audacity you’d generally expect from a seasoned filmmaker, and the remarkable ability to probe deep into the troubled and complex psyche of his protagonist. The movie stars Prosenjit Chatterjee, in what could be one of the most telling roles of his career, as Biplab – a (possibly schizophrenic) man with a ‘Dr. Jekyll/Mr. Hyde’ kind of dual personality. By day he is a laconic, mild mannered employee in a fast-crumbling company – the kind of ‘chhaposha’ or very ordinary, middle-class Bengali man you wouldn’t look twice at if you were to meet him on the street. However, when this severely lonely, friendless man returns to his small, seedy, decrepit apartment, he gets enmeshed in a fantasy celluloid world, where, over a few drinks, he involves himself in long lovelorn monologues with popular film actresses. The film’s surreal storyline has been superbly aided by its mesmerizing cinematography – the dark, phantasmagoric, hallucinogenic interiors of Biplab’s otherwise dank apartment makes for a memorable and sensually arresting viewing experience.

Well, you can say that, but not as gritty :)

Well, amar kintu kothao mone hoyni je director antlamo korchhe, I guess its a relative term... and yes, portrayal of Prosenjit's suicide was indeed brilliant. In fact, i felt when he was slashing the blade over Ash's poster, he was actually slashing it on himself.

Not to forget the Wong-Kar-Wai-ish visual poetry. Like the multicolored neons sparking sporadically, the sequence of chiaroscuro created by the curtains in his room etc. A visual feast.

Indeed, Sthito. By managing to graphically portray the dank nature of his environs and the melancholy of his existence with the kind of the expressionistic splurge to get into his fantasia, the director upheld the dictum that, at the end of the day, cinema is a visual medium.