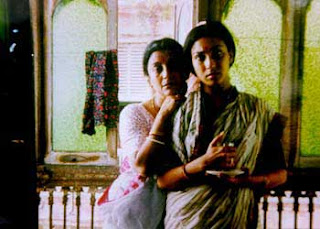 Aparna Sen was a successful Bengali film actress, and has transitioned as one of the most respected directors of . Though not very prolific in her output, she has made up with sheer quality, with Paromitar Ek Din ranking as one of her finest directorial efforts. The movie opens with Paromita attending the final services of her former mother-in-law Sanaka, and as memories start filling her mind, elaborate flashbacks are used to reveal her marriage into the family, the slow disintegration of her marriage, and the simultaneous burgeoning bond with the severely lonely Sanaka, over a period of 14 long years. Observant, sensitive, nuanced and profoundly affecting, the movie has managed to capture the various layers that define human relationships – one’s inherent loneliness, fleeting moments of platonic friendship, and the numerous moments of heartbreak that lie in between. Brilliant, devastating performances by Rituparna Sengupta as the serious and reserved Paromita, actor-director Aparna Sen as the Paan (betel leaf)-chewing Sanaka, and Ray favourite Soumitra Chatterjee, as Sanaka’s quietly melancholic childhood friend, and the terrific, elegant cinematography which has managed to capture the distinct flavour of North (old) Calcutta even though nearly the entire movie occurs inside the family’s ancestral home, played their parts in making this an exquisite human drama.

seems to be interesting. Have you noticed that Most of the films directed by Indian Female Director portray the relationships in a btter way than the male counterparts?

Even the south Indian Director Revathy's Phir Milenge had it's finer moments.

Well, that's an interesting point that you've raised, though I wouldn't necessarily agree to that. I'd say a Hrishikesh Mukherjee was or a Rituparno Ghosh is equally adept at exploring the nuances of relationships.

I have heard good things about Phir Milenge, though unfortunately I haven't yet watched it.

Hrishi Da in any day is better than any other - Yes, i vote with both my hands.

the saddest part was, after growing up with all the Hrishi Da's Classics, the only film that i watched in theatre was "Joot Bole Kavva Kaate".

i Took most of My friends (Tamilians) after bunking the college in chennai and though i loved it, most of them disliked after the build up i gave them about Hrishi da.

about, ghosh, yes, to some extent. i haven't watched most of his films. so can't really comment on it.

Yeah, it is really unfortunate that your friends got to watch one of Hrishikesh Mukherjee's least works. I of course have similar enthusiasm for a number of his movies like Anand, Abhimaan, Namak Haram, etc.

As for Rituparno Ghosh, I'd suggest do not go for his otherwise 'popular' movies like Chokher Bali or The Last Lear. In my opinion they are among his lesser works. The films of his that I love include Utsab (The Festival), Shubho Mahurat, Unishey April, Dosar, to name a few. In fact I liked his Raincoat quite a lot as well.