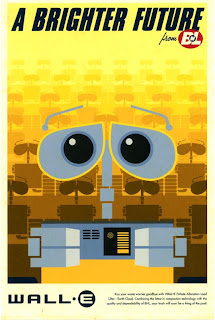 WALL-E is rated by many a film critic as Pixar’s best work till date. Pixar has established such a reputation with its groundbreaking behind-the-scenes work that one has almost come to take technical virtuosity in their movies for granted. Hence, suffice it to say, WALL-E doesn’t really surprise in that its 3-D animation is a visual delight. Nonetheless, it still managed to be exhilarating by slightly raising its already exalted standards. But what really interested me most was the level of maturity displayed. In fact, the first half-hour of the movie, which is sans any vocals, is, on one hand, a unique and enthralling visual poetry in motion, and on the other, a quietly disturbing view of a dystopian, post-apocalyptic future where the earth is filthy, desolate and uninhabitable. All we see is ‘Waste Allocation Load Lifter – Earth Class’, aka WALL-E, a Chaplinesque robot, quietly going about compacting garbage, and striving to preserve few moments of solace and serenity in its otherwise mundane existence. And then he (it) falls in love with an Extra-terrestrial Vegetation Evaluator, resulting in some hilarious gags. Only when ‘humans’ come into the picture does the movie veer towards a cartoonish setting and a more traditional kind of storytelling, which is even heavy-handed at times, thus causing (quite regrettably) the initial brilliance and the ensuing wonderment to sag considerably.

There tends to be a wide range of views on the latter two-thirds of the film (I think there's enough good there with WALL-E, EVE, and friends, to override whatever clunkiness abounds from the humans) and can see where some find that part a bit of a failure.

Yet, it's almost universal that the beginning earth-bound scenes are some of the finest dialogue free scenes created. As you state, there really is quite a "enthralling visual poetry".

A magical first half hour indeed. Have you seen UP?

@ Troy: Yes, I agree with you regarding that. In fact, people for whom WALL-E is a 5-star movie or a masterpiece, obviously find the last 2/3rd as or at the very least nearly as interesting.

Well, I don't belong to that group, and the movie failed to reach the level of masterpiece for me. But if the movie had lasted for just those initial 40 minutes or so, I would have gladly given 5.5 out of 5 to WALL-E, I found the dialogue-free scenes that good.


@JAFB: Unfortunately, I haven't watched UP yet, but hoping to correct that sooner rather than later. Which among WALL-E & UP would you rate higher?

Up, easily. I loved WALL-E. But with UP, Pixar achieves a subtlety rarely seen in mainstream cinema, leave alone in animation.

Now that will push UP considerably forward in the queue :)

I agree about the film's maturity. I think it's the most adult of all Pixar's movies to date.

Also, I wanted to let you know that I named your blog for the <a href="http://flickchickcanada.blogspot.com/2010/01/kreativ-blogger-awards.html>Kreativ Blogger Award</a>.

@Omar: Now that was as monosyllabic as it gets ;P

@Norma: Thanks a lot for the appreciation and good words. Means a lot. Hope to see you more often at this humble place of mine.

This visionary animated film may well be regarded one day as one of the greatest of all animated features, stretches the boundaries of the form, and of art in general. This science-fiction parable/love story is wrought in the mold of Spielberg’s E.T., but its a film that echos the silent era in it’s post-apocalyptic extended early sequence. The film’s soaring emotional center is the robot trash compactor “WALL-E’s” infatuation with songs from the film Hello Dolly! and the later relationship with his counterpart, Eve. The film has it’s level of cynicism, and there’s a hopelessness that recalls A.I. Technically and in its painstaking attention to detail it may well be the most accomplished of animated films. It is an exhilarating film of great physical beauty and wonderment, yet like all great art, its heartbreak is palpable. The voice work and Thomas Newman’s score are first-rate, but the lion’s share of the credit must go to director Andrew Stanton, who made a film of extraordinary depth, bringing together an arsenal of cinematic resources, and shooting a laser beam to the very center of the human heart. Of course, Shaubhajit, you have come to be basically the sam econclusion here is this brilliant passage, the most vital section of your superb review:

"In fact, the first half-hour of the movie, which is sans any vocals, is, on one hand, a unique and enthralling visual poetry in motion, and on the other, a quietly disturbing view of a dystopian, post-apocalyptic future where the earth is filthy, desolate and uninhabitable. All we see is ‘Waste Allocation Load Lifter – Earth Class’, aka WALL-E, a Chaplinesque robot, quietly going about compacting garbage, and striving to preserve few moments of solace and serenity in its otherwise mundane existence."

I saw the film again yesterday on DVD and what a remarkable improvement in appreciation it was!

The first one hour of the film is a flat-out masterpiece of the highest order. It blends and plays with almost all the genres out there - western, romance, sci-fi, comedy, fantasy and even film-noir. Even in the final half hour, that is a bit plagued by Disneyism, Pixar's brilliance shines through in blink-and-you'll-miss events.

And its designs were so similar to Avatar (right from the opening shot to Sigourney Weaver to the geographical and visual compositions to the inherent feminism). One could almost create a one to one correlation here.

Even with all its all its apparent cynicism, its a film that reeks of humanism. And that is what mainstream cinema needs.

JAFB: I do see what you mean about a correlation between Wall-E and Avatar, but it seems to me that their conclusions put the two films in very different camps. While they're both potentially a little "preachy" with undertones of feminism and environmentalism (overtones of the latter, I guess), Wall-E ends on a hopeful note. Earth is being repopulated and the human race has rediscovered its humanity. In Avatar, the "good" humans are the ones who have given up on Earth and moved to Pandora; one of them even gives up his humanity quite literally. I can see how the moral of the story of Wall-E is ethically motivating, but with Avatar it seems like the idea is that eventually we'll need to ditch our planet, find a better one, and assimilate with another race. This seems to me a simplistic reading of the film, but I'm struggling to find a better one.

@Sam: Wow, that's one of the most 'personal' responses of yours that I've read!!!

Thanks a lot Sam for sharing you enthusiasm for the movie. Your tremendous love for is is more than palpable in your profuse and heartfelt praise of the movie. And its easy to appreciate that since WALL-E does have that innate quality to stick to one's memory. And that you've mentioned, I too was quite surprised to see the kind of barely suppressed cynicism and satire. It might not have worked to that extent with me as it did with you. But can't help but say I did like the movie as one would expect, more so the initial voice-less portion.


@JAFB: Wow, I'm sure you had a great time watching it again. As you've so succinctly put it, the first half hour is indeed of the very highest order and does rank alongside any cinematic masterpiece one can think of. And I fully agree that for all its cynicism, there's no denying the humanity that the movie has so unabashedly championed. Thanks a lot for sharing your mind.

ZC, I agree that they are poles apart in their conclusion (My own preference for the 2 movies lies in the extremes) and the similarity is nothing but pure coincidence, given that Avatar was conceived before WALL-E. Just that I was continuously reminded of Avatar while revisiting WALL-E.

ZC & JAFB, that's an interesting debate you've hit upon. Personally, like ZC, I too find it a bit far-fetched to juxtapose WALL-E with Avatar since I found them quite drastically apart, apart from the fact that they are both sci-fi, futuristic movies. In fact where WALL-E begins with a post-apocalyptic future where humans might/might not exist anymore (we come to know that humans have survived much later), Avatar is essentially humans using futuristic technology to reinvigorate their desire to colonize Pandora and exploit its resources, and hence is far more environmentally aggressive than the former.

But yes, I do understand what JAFB has meant about the incidental (and to a mild extent, thematic) similarities.

Thanks ZC & JAFB for your insights and opinions.

I thought I was the only one who believed this to be vapid Pixar fluff. I'll take THE IRON GIANT any day over WALL-E.

I agree the first half was very good and I liked the Kubrick reference later on, but the clunky narrative is too childish: maybe I was expecting the sublime beauty of Miyazaki!

There is no frisson, no coherence or suspense that drives the characters. It's obvious that everything will work out OK, there is no danger of failure. Films can be child-like without being childish (just read Neil Gaiman). I'll stick with Studio Ghibli and skip Pixar...and especially the rubbish from Dreamworks.

Thanks Alex for stopping by.

Well, I understand what you mean. As I mentioned in my review, despite being bowled over by the first one-third of the movie, I too was quite disappointed by the '...and they lived happily ever after' kind of feel-good climax.

I felt, by going back to treading beaten, even cliched track, the initial brilliance of what felt an uncharacteristically matured and adult effort from Pixar, was quite significantly undone in the juvenile and populist portions that followed. Hence, my liking of the movie rests largely on the initial section.