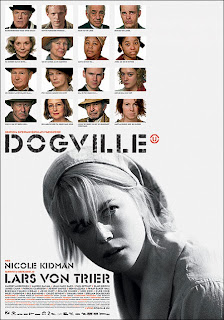 The epithet used most often to depict Danish auteur Lars von Trier is ‘provocateur’. Because of it, or perhaps even despite it, his most defining feature, for me, is that I find each movie of his as unique, as daring and as distinct as his other movies that I've watched. Yes, in Dogville too there’s a woman suffering at the hands of her tormentors/ circumstances as in his Breaking the Waves, Dancer in the Dark or Antichrist. What sets this epic film apart are the stripped-off art décor and set pieces that have given the movie the look, feel, aesthetics and character of a stage play; so does the narrative, which has employed extended, at times rambling, but downright brilliant voiceover of John Hurt, coupled with the deliberately theatrical acting of the terrific cast – Nicole Kidman, Paul Bettany, Stellan Skarsgard et al, to tell the downbeat, philosophical, provocative and Biblical story of societal hypocrisy and double standards. Nicole Kidman, as Grace, an enigmatic woman on the run who seeks refuge in Dogville, a small mining-town in , doesn’t just look ravishingly beautiful, but also fragile and vulnerable, in one of the most nuanced performances of her career. Pictures of that tragic era, shown during the end credits, are extremely evocative.

Great write-up! DOGVILLE is one of the ten best films of the past decade with the "sequel" MANDERLAY close behind. I suppose this is how Trier views us Young Americans...

Thanks Alex. Well, I know the movie has often been cited as anti-American. But I think the movie is essentially a pungent critique of human race, and it is but coincidental that the story is set in Depression-era America. I hope that lifts up your spirit a bit ;)

Have not seen this but I just got hold of a copy of Manderlay which will be my first Lars von Trier film.

This is my personal favorite of Von Trier's, a director I've always favored, with this film my #1 of 2004, and DANCER IN THE DARK my tops for 2000. I believe you've also reviewed BREAKING THE WAVES on these pages - another film I rate highly. But you convey the singular quality of DOGVILLE when you say this:

"What sets this epic film apart are the stripped-off art décor and set pieces that have given the movie the look, feel, aesthetics and character of a stage play"

This Brechtian minimalism is really what accentauates teh singular sense of urgency which cuts through what seems to be a rambling narrative, but is eerily mesmerizing.

Thanks a lot Sam. Yeah, I know this is your favourite Lars von Trier movie, and quite deservedly so. The movie's most thumping impact lies in that, even when we watch unfolding before us a thesis on human crookedness & hypocrisy, we can not really be sure whether the director is trying to open our eyes to it or just smirking at our inability to read his real intents.

Personally, though, my favourite Lars von Trier movie is also his most acclaimed work - Breaking the Waves.