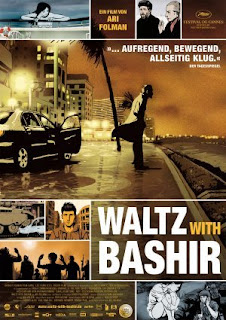 and Waltz With Bashir, released one year apart, provided the perfect one-two sucker punch to those who strongly believed animation movies are only for kids. While being told over a drink by an old friend of a recurring nightmare, Ari Folman, the movie’s director, suddenly realizes that memories of his military service during ’s war with in 1982 are sketchy at best. Made in the form of a semi-documentary, what follows is a recapitulation of the disturbing events in an attempt to recover his lost memory. Right from the stunning opening sequence of 26 vicious dogs running through the streets, till the grim climax (though, in my opinion, the actual war footage could have been done without), the movie never ceases to enthrall. The arresting visuals – brilliant, heavily stylized artwork accentuated by bright, mesmerizing palettes – managed to juxtapose with amazing ease a sense of immediacy (of the on-field violence) with striking hallucinatory imagery (as a reaction to the characters’ memories of those events). The haunting and deeply surrealistic narrative has been superbly aided by an equally effective soundtrack. Waltz With Bashir is a truly unique and unforgettable piece of work.

Ah, what a nice film... Blending pure fiction (in the form of animation) and pure docu styles like the protagonist's memory itself is a nice move...

And I thought the war footage was indespensible considering the idea of the film - a construction of the actual past free from personal abstractions and self-consoling visions (as in most part of the film).

My only problem with the film is that it looks a bit "ready for sale" - the immediately arresting visuals, the topicality of its subject and the instant international advantage of an Isreali director criticizing Israel. Somehow, the introspection part seems to take a back seat and the director seemed like wanting to make a statement rather than question...

A wonderful film indeed. As you've aptly put it, the kind of concoction that the director brought about is truly unique in every sense of the word.

Well, in my opinion, the war footage slightly diluted the visceral content of the movie - it sort of made his point rather obvious. After all by then we all knew what his point of view was.

As for the problem areas you mentioned, I agree they in a way sound forceful, jaded and perhaps even trite. However, I'd say the director deserves a lot of kudos for sidestepping these pitfalls and presenting us with something that's not just innovative but also deeply engaging considering the seriousness of the subject the movie deals with. I guess there's no harm in making a statement as long as one respects the fact that not everyone might agree with him.

And the artwork - that just blew my head off!!!

this is truly a work of art...n as for the story, i think the end with the real war footage made the end more poignant...if u were an islreali director, ud probably understand wat im talkin bout...u knw, u make movies 2 make a point, 2 cause a change...look @ da bigger picture here (pun intended!)

I know I might be in the minority where where one stands where the movie's final scene is concerned, but I'd still say it was the difference between a 4.5 and 5 for me. I understand what you mean, but I'd say it was perhaps one of the very few blemishes in this otherwise amazing movie.

its like if i would make a film on the bombay bomb blasts (pick anyone of the many) n if i had seen part of it live, or captured some footage...as an artist im so inspired to share that footage with da world or include it in my work of art which is so close to my heart (no rhyme intended!)