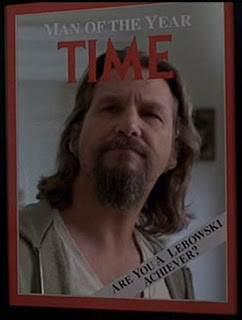 The Big Lebowski, the Coen Brothers’ followup to their greatest masterpiece, , was a movie as markedly different from its predecessor as there can be – the kind of parallax shift they repeated later with No Country for Old Men and Burn after Reading. The movie can be considered a cornerstone for the kind of unapologetic irreverence and humour they have become legendary for. When Jeff Lebowski, perhaps the biggest slacker in the whole of , and who prefers to be called by the epithet “The Dude", is visited upon by a couple of thugs, one of whom relieves upon his rug, what ensues is a madcap comedy with a serpentine plot that is as skewed and hilarious as its utterly wacky characters. Jeff Bridges as the eponymous bum-cum-stoner, and John Goodman as his gleefully neurotic bowling buddy, headed a terrific support cast, including the likes of the histrionic tycoon David Huddleston, the comically unctuous Phillip Seymour Hoffman, the "vaginal" painter Julianne Moore, the exceedingly demure Steve Buscemi and the impossibly profane John Turturro, to provide a memorably idiosyncratic ride through mistaken identity, double crosses, embezzlement, kidnapping and the porn industry. Watch out for a surrealistic song-and-dance sequence on, know what, bowling!

A film made for quoting lines now and then :)

u knw, im not dat big a fan of the coen brothers...i didnt even like fargo that much...

You didn't like Fargo?!? Its one of those movies that I just can't have enough of.

This is by far my favorite Coen Brotehrs film. Walter Sobchak is one of my favorite movie characters of all time.

Though not my favourite (that would be Fargo), its still one of their best works. And from your opinion its easy to understand the kind of cult status it enjoys to this date. And yeah, the character of Walter was simply awesome!!!

I never really thought about the night/day releases of these guys till you pointed it out. You could add their first two films to that 'parallax shift'. Awe-inspiring, really.

Did you ever see Intolerable Cruelty?

Yeah, I guess the Coens have split personality syndrome - never know which version of the Coens is making the latest movie until you've watched it!

No, I haven't seen Intolerable Cruelty. I've heard its precisely that ;) But since I'm a big admirer of theirs, I'm sure that I'll eventually watch it.