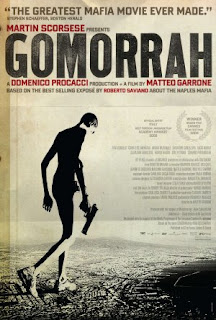 One of the highest rated Italian movies of last year, is a bleak, stark and an unflinching look into the crime-ridden underbelly of the . Through five loosely connected stories – a teenager getting seduced by the crime culture around him; two neurotic guys thinking they are beyond the Mafia’s reach; a haute couture tailor trying to earn some extra money by working with a Chinese cloth manufacturer; a young guy getting acquainted with some harsh reality while working for his boss whose business it is to dump toxic industrial wastes; and a money runner trying to survive the clan wars around him – the director has provided a detailed documentary-style exposé of the Camorra, one of the most feared organised crime syndicates of Italy. Filled with grim realism, the movie has a neorealist feel about it, with its mostly outdoor shoots, natural lighting, characters enacted with spontaneity that gives a non-professional feel to the performances, and a complete lack of any high drama, showmanship or ostentation. Viewers might find it slow and difficult, but this deglamourized gangster movie is a fine no-nonsense work all right.

This is one film that I feel will grow with the years...

Yeah, I guess I'll go with you on that.

I could agree with that statement, but I honestly was a little underwhelmed upon first viewing. Roberto Saviano's book was so good, and really a landmark as far as organized crime work, so I was expecting something more from the film. It did still like it though.

Yeah, as I mentioned in my review, the movie is completely bereft of any spectacular stuff - just a documentary style chronicling of the common humdrums of life. Honestly speaking, that was precisely the reason I gave the film 3.5 instead of a 4. In fact on that note it could be mentioned here that the movie in a way resembles the deglamorized feel of Romanian cinema, only minus their sense of wry humour.