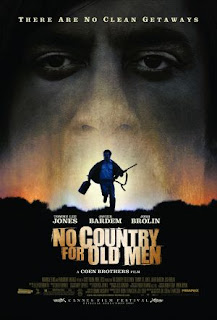 No Country for Old Men, a bleak, disturbing and brooding thriller, nearly managed to outclass , the Coens’ greatest movie – it is that good! When Llewelyn Moss (Josh Brolin), a Vietnam War veteran and a man straight out of wild west, stumbles upon 2 million dollars of dirty drug money, he unwittingly sets off a chain reaction whose repercussions sets him on an insane collision course with Anton Chigurh (James Bardem), a laconic psychopath – a relentless force of insurmountable evil who deposes his victims with a hydraulic cattle gun with cold, chilling efficiency. Meanwhile, Sheriff Bell (Tommy Lee Jones), an old-timer, laments at the uncontrollable escalation of violence engulfing human society. Spectacular photography, aided by near deathly silence and a terrific screenplay, managed to make this dark, gripping thriller a disquieting meditation on the inescapable nature of fate, and a good versus evil tale of biblical proportions. The acting of the superbly chosen cast is spectacular throughout – a quintessential aspect of Coens’ movies; Bardem is especially awesome as one of the scariest screen villains I've ever seen. Multiple viewing, by the way, is absolutely essential to appreciate the devastating power of this cinematic masterpiece.

I wholeheartedly agree to that. I though Bardem was god in Vicky Christina Barcelona but then, I had never watched this movie. The first time I watched it, I thought it'd be some "oohh-I-stole-your-money-come-get-me-while-i-do-circus-antics" kinda movie.

But, and I'm glad to admit, I was terrible wrong.
This is one awesome movie for sure!!

Yeah I completely agree with you, the movie explodes on the screen each time Bardem makes an appearance - he is one helluva actor.

And as for the Coen bros., they didn't just brilliantly juxtapose nerve-racking violence with contemplative lamentations, but also masterfully punctuated the grim content with subtle moments of wry humour. A brilliant movie indeed.

I would probably rank this as #4 or #5 for my favorite Coen Brothers films, but that's not a knock on the film at all -- I really like it. But they have made so many great films, so there is a lot of competition there.

I agree with your previous comment, Shubhajit, there really is some wry humor scattered throughout the film.

Yeah, You are absolutely right. The silence of the movie explodes on the screen.

So much thought has been given to the fight scenes that it really gets to you.

I really appreciate the Oscar given for the best actor. It could not have done better justice.

I love reading your reviews. :)

@Dave: Thanks Dave for your comment. I know, ranking is one thing while appreciating the greatness of a movie is another thing, cos while you rank complete impartiality can' really be achieved. So when a guy like you, whose understanding of cinema as well as whose writing I consider as a benchmark where movie blogs are concerned, agrees with my opinion, I know I'm doing allright as a cinephile.

@Muthu: Thanks a lot buddy for your appreciation and good words. Yeah, every single aspect of the movie works like a silent time bomb (preferably German made) - you know bloody well that its going to burst given the kind of precision they achieve in their engineering, yet every time it explodes you are left dumbfounded.

At last a movie which was shown on TV.. I did not like it.. but I am sure now after reading your piece I will look for that which you saw next time they show it. As u said multiple viewing is necessary and TV does provide that (Star or HBO)

:) By the way, I think subtitles are requires to fully appreciate this movie, cos with those Texas accents grasping each word might be a tad difficult - esp. on TV where you can't go back.

No Country for Old Men is a crime thriller movie. Really it is full mishmash of action, drama, adventure, western, suspense, crime and thriller that will make you glued in your seat. Javier Bardem and Woody Harrelson have done tremendous acting in this movie, So Watch No Country for Old Men movie and appreciate their performance.

I think the most important thing about this coen bros creation is that watching this film is a pure cinematic experience which no other forms of art can provide you.It is only possible in cinema.It is really a cinematic masterpiece.

Thanks Avijit for the passionate espousal of the film. Though I really don't think it would be fair to compare with other artforms, but yes, cinema, like literature, music et al has its distinctive features which does make it stand on it own merit.