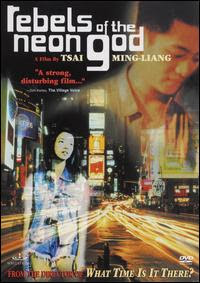 Tsai Ming-Liang, one of the most prominent directors to have come out of the cinematically productive land of Taiwan, made his film debut with this oddball, whimsical, harrowing and deeply brooding parable on human loneliness and urban alienation. The paths of the severely disaffected son of a cab driver, and a brash chain-smoking thief who steals changes from telephone boxes and computer parts from video game stores he frequents along with his equally delinquent brother, cross when the latter deliberately vandalizes the cab while the former is riding in it along with his father. While the two brothers continue with their petty stealing and the elder of the two spends the remaining time making love to his casual girlfriend, the cabbie’s son starts following them in his quest for revenge. An extremely low-budget minimalist film (with camera movements, dialogues and music kept at bare minimum), the Taiwanese art-house movie is difficult to start with. Yet thanks to the visually poetic and psychologically jarring depiction of estrangement, juvenile rebelliousness (yes, James Dean does make a very special blink-and-you-miss appearance in the form of a poster from Rebel Without A Cause!), seedy neon-washed underbelly of Taipei’s urban jungle with all its squalor and decadence, and a curious mix of understated pathos and bleak irony, Rebels of the Neon God has become a cult Asian classic that deserves more dissertation and wider recognition.

It's funny that out of all the Chinese films you could have chosen, Tsai Ming-Liang's movie was the one you picked for our discussion. You see, he had burnt us before with his 'minimalist' style.

We saw 'What Time Is It There?' & 'The Hole'. Both these movies made our eyes tear up with boredom. We feel that instead of having a minimalist style, he has no style. He just trains the camera onto the most mundane things. If this is what filmmaking requires, we all can be directors. We're still scratching our heads on why he has been critically acclaimed by some quarters. Maybe it has to do with our unrefined tastes, we're not sure.

In any case we would like to bring out the fact that although based in Taiwan, Tsai hails from Malaysia.

Well, it is difficult for me to either ratify or refute you views about Tsai in general, because i haven't seen "Hole" or "What Time is it There?" - the 2 movies you've mentioned.

But speaking of "Rebels of the Neon God", it is minimalist, it tracks mundane as well as not so mundane scenarios, and i found it to be a very good movie.

I belive that a movie need not necessarily be fast or high-voltage or with high entertainment quotient to qualify as a good film. And this i feel is true for every work of art. If that hadn't been true, James Joyce or Jean-Paul Sartre or Bergman would have never qualified as great artistes.

However, the above points doesn't mean i'm placing Tsai in the same pedestal as these great figures for the simple reason that he isn't. It was just a point that i wanted to make in reply to your comments.

Thanks for your views nonetheless. i guess we need to go back to the case of "Apples & Oranges".

I am very fond of Tsai's minimalist cinema. I think that what he does is quite far away from "training the camera onto the most mundane things" It is much more difficult than it looks to capture everyday reality and make it look, well, real Tsai shares that gift with another Taiwanese director, Hou Hsaio-Hsien.

Well Rick, all i can say to that is, Touché.