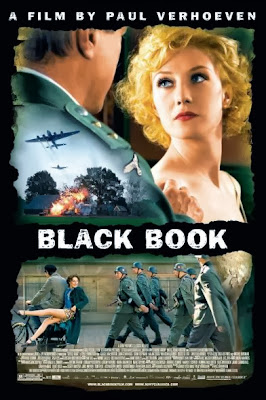 Controversial director Paul Verhoeven’s foray back to his native The Netherlands after spending two decades at Hollywood has resulted in the bold, slick and engaging war-time thriller Black Book. The movie clearly shows that the Dutch auteur’s ability to command big budgets, make good old-fashioned thrillers and his unquenchable knack for shocking his audience without as much batting an eyelid has not been dampened. The story, set during the near-end of the bloody World War II, follows a stunning (and wildly promiscuous) Jewish dame Rachel’s desperate struggle to stay alive at Hitler-ruled Holland, seek justice for the brutal slaying of her family through underground revolutionary movements, and survive (and prove her innocence) from the same guerrilla fighters after she falls for a Nazi officer Muntze and the two are nicely set-up by the vile, villainous immediate subordinate of the sympathetic Muntze. Some of the twists are very well concocted but for the final one which is too forced and uncalled for. Despite the unimpressive acting talents of the lead actress and a number of one-dimensional characters, the gorgeous production design and taut screenplay, in the expert (and surprisingly sympathetic) hands of the veteran director, have managed to engage the viewer insomuch as it is attractive to the eyes but not to the extent that he would ponder over it or would be staggering from its impact.

I think this is one of the best films of the last few years, it really bowled me over. I can't think of another film from the last few years that better fits the description, "staggering from its impact." I can't disagree strongly enough about van Houten's acting, either. She gives a real tour-de-force performance, just a brilliant realization of a very complex character. I also think the film is much more than just a slick action movie, although it's certainly satisfying enough on that level too. There's a lot more going on in the film in terms of its treatment of relativistic morality, sexual politics, and historical truth.

Verhoeven is a fascinating director, and I think a lot of people miss the deeper levels of movies like this because of the director's extreme tonal ambiguity. My own review goes into some more detail about everything I loved in this amazing film.

Verhoeven is indeed a fascinating director, i agree with you on that completely Ed. Even in his mainstream movies he brings in a strange magnetism that hooks the viewers on to the motion. The same happens here. But unfortunately (& this is a wholly personal opinion) Black Book, maybe because of the Verhoeven factor, fails to entice us to empathize with the brutalities and exploitations shown. And some of the plot developments, too, don't seem necessary or realistic.

However i can understand your positive reactions to the movie because this is one of those movies that induces ambivalent reactions among the viewers. That is vintage Verhoeven to me.

Do have a look at you comments section of your review of Black Book. I have posted some more of my views there in response to your review (which i must reemphasize, is excellent to say the least).