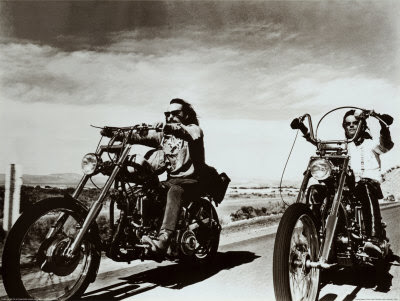 Naming one movie that managed to vividly capture the nuances, the rebelliousness, the freedom, the anti-establishmentarianism, the counter culture, the angst, and the existentialism postulated and typified by the hippie culture, would be exceptionally difficult, but Easy Rider would be right up there. Directed by one of the most versatile character actors of his generation, Denis Hopper, Easy Rider has managed to lucidly portray the thoughts and expressions of a generation. The tale of two bikers (the Zen-like Peter Fonda and his manic sidekick Hopper), without any strings attached to their existence, who have hit the road without their watches and with a whole lot of dope, criss-crossing through America in search of psychedelia, freedom, love and utopia, in other words America, was as relevant to the turbulent post-Vietnam War era as it is today. Jack Nicholson, as an alcoholic equally free-spirited and rebellious lawyer who isn’t a hippie but craves to be part of the journey, established himself as the premier thespian of his generation, and with his devilish charm and Cheshire grin as one of the most fascinating actors to have stepped in front of a motion picture camera. There have been numerous movies on the iconic hippie movement, but never quite one like Easy Rider.

I was definitely glad that I had read why people consider Easy Rider such a classic before I had read it, otherwise, the graveyard scene would have completely lost me.

Great write up about it.

Thanks a lot for your appreciation.

Yup, I understand what you mean. A truly great movie, filled with nuances and ironies.

A more subtle counter culture movie was Schlesinger's Midnight Cowboy. As in your critique of Taxi Driver, NY city is an integral character in MC. Grittier, better performances, and a different tack that nails where the plot for the 60s began to unravel. Easy Rider was too one dimensional - the ending especially, where the 'rednecks get the hippies' is honestly far fetched. Justifiable for cinematic effect, perhaps. As a historical document, somewhat flawed and biased however.

I like how the soundtrack sort of says what the guys on motorbikes are feeling, particularly the opening credits sequence feat. Born to be Wild.

Yes, a film about the times, but nonetheless highly watchable today for the unpredictability of who they meet on the road. Zen-like and manic, good descriptions of these colorful characters, ha ha ( : I think it ought to be in imdb’s top 250.

I’ve reviewed Easy Rider on my blog this week, should you have the time to stop by ( :